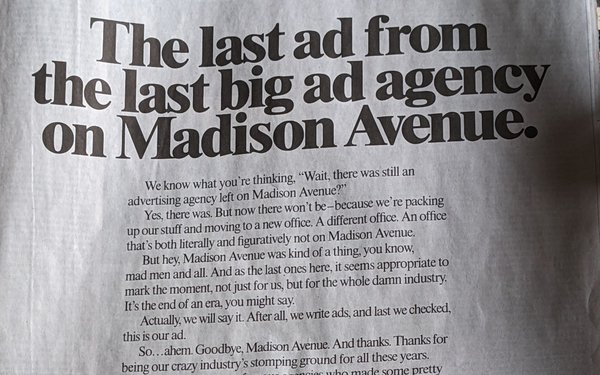 Calling itself the “last big ad agency on Madison Avenue,” Omnicom’s TBWA\Chiat\Day announced to the world today (or at least to readers of the New York Times) that it’ s leaving the avenue that’s indelibly linked to Adland for new digs at 220 East 42nd Street, still known as the “Daily News Building” even though the paper decamped back in the 1990’s.

The move, effective today, will put the agency about 15 blocks or so southeast from its old offices.

The full-page ad in the front section of the paper starts off, “The last ad from the last big ad agency on Madison Avenue.”

In the ad the agency bids farewell with a thanks to the avenue “for being our crazy industry’s stomping ground for all these years.”

The ad lists some the iconic catch phrases dreamt up during Mad Ave’s hey day as “home” to Adland including “Think Small,” “Mikely Likes It,” “Where’s The Beef” and others.

The ad continues, “But with all the good, there was some not-so-good. Let’s say a final goodbye to--The three-martini lunches (They were fun though weren’t they?) The corner offices. The 12-hour-plus workdays. The board rooms filled with only white men. The burnout.”

In fact, “old advertising” ended a few decades ago. But, as the shop notes, “last time we checked, this is our ad.”