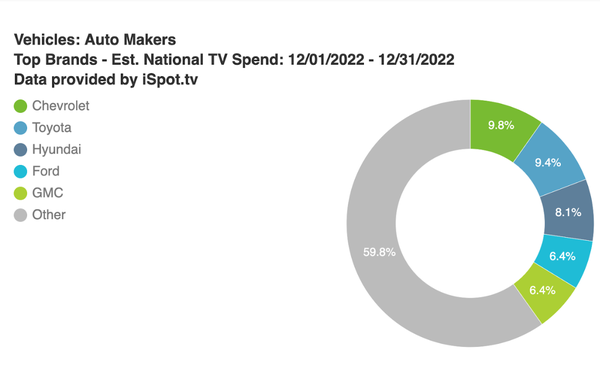 Automakers spent an estimated $336 million on national TV spending in December, down 9.8% from December 2021, according to iSpot.tv.

Despite the decrease, December TV ad impressions were up to 31 billion, a 4.2% increase from the same period a year ago.

“Even with increased emphasis on NFL, automotive brands still maintained investment in holiday movies and reality programming, while adding the World Cup to the mix as well to maximize reach to as many consumers as possible,” Schwartzapfel tells Marketing Daily.

Volkswagen’s climb was fueled by a World Cup focus across both Telemundo and Fox (the two networks combined for more than 50% of VW’s December spend), and more budget put toward Hallmark holiday programming as well as HGTV shows, according to iSpot.tv.

For Kia, the brand spent more year-over-year on NBA and NFL games, while also dedicating more budget toward popular syndicated shows like The Big Bang Theory (283% more spend during that program alone).

Of the top 20 programs for automotive brand TV ad impressions, half were sports-related (compared to just six in Dec. 2021).