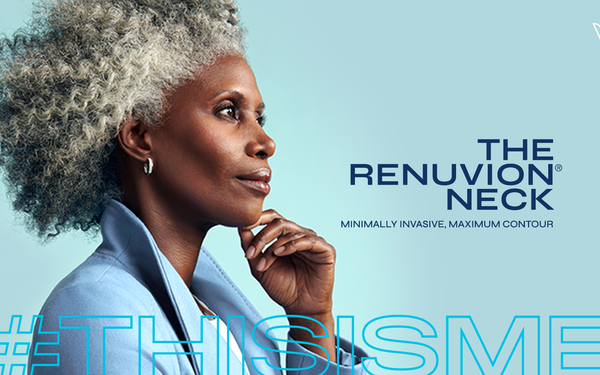 Renuvion, a skin-tightening cosmetic surgery  procedure for the neck and chin from Apyx Medical, has launched #ThisIsMe, its first consumer campaign.

Prior to the consumer campaign, Renuvion’s marketing had been directed solely to plastic surgeons, cosmetic surgeons, and dermatologists, Hoffman notes. Hospitals are also targeted under a different brand name.

Renuvion hopes the marketing campaign will drive potential patients to its website, where “they can learn more about us, and then perhaps choose a doctor in their area who uses Renuvion,” Hoffman says.

The first three digital display ads each show a woman’s profile from the neck up, with the words “The Renuvion Neck, Minimally Invasive, Maximum Contour” and the #ThisIsMe hashtag.

Social media posts haven’t referred to the neck or chin, but feature women saying such things as “I’m treasuring the way I look more now than ever.”

The campaign “is geared toward people who have expressed interest in cosmetic/plastic surgery procedures in their online activity, and have either had procedures done, or are looking into having a procedure done,” Hoffman says. Renuvion is also targeted to “potential patients who have looked into getting plastic surgery done, but were scared off because of the expense, down time, discomfort, and lack of predictability,” he adds. “All of these factors are mitigated when using the Renuvion technology.”

Using helium plasma and radiofrequency technologies, Renuvion is a one-hour, single-treatment, minimally invasive, under-the-skin procedure that can be performed under a local anesthetic.