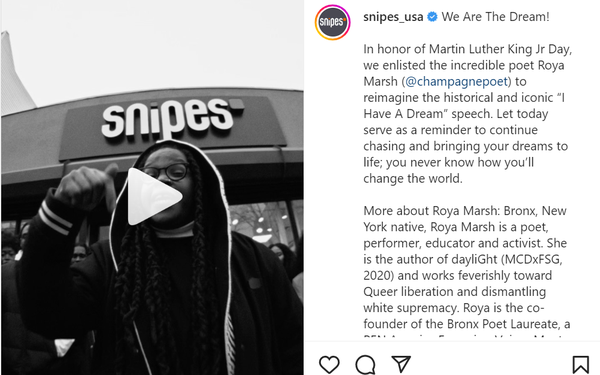 To celebrate Martin Luther King Jr.’s Birthday and the 60th anniversary of his iconic I Have A Dream speech, sneaker and streetwear retailer Snipes worked with Roya Marsh, a poet, performer, educator and activist, from the Bronx, NY, to reimagine the address.

The reimagining can be accessed here.

Marsh is the author of dayliGht and works toward Queer liberation and dismantling white supremacy. She is the co-founder of the Bronx Poet Laureate, a PEN America Emerging Voices Mentor, Lamda Literary faculty and the awardee of the 2021 Lotus Foundation Prize for poetry. She’s performed at Carnegie Hall, The Kennedy Center, The Apollo Theater and other venues.

Snipes was founded in Germany in 1998 and now retail stores across Europe and more than 300 in the U.S. mostly in the Mid-Atlantic and Midwest regions with further expansion plans.