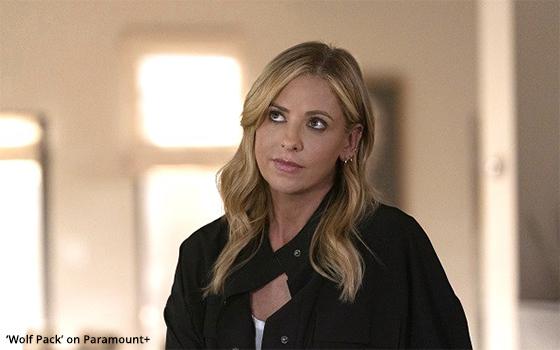 The new drama series “Wolf Pack” premiering this week on Paramount+ is “Twilight” with werewolves.

I am sure there are many differences in the details between “Wolf Pack” and the “Twilight” series of teen vampire movies, but the above description does a pretty good job summing up this new mystery/horror series that appears to be aimed primarily at teens.

Teens will take to this scenario a lot more readily that older people. The show has the angst, alienation and growing pains that teens look for in their teen horror movies and TV shows whether they be turned into vampires, werewolves, zombies or Frankensteins.

In “Wolf Pack,” the first werewolf-afflicted teens we see are a boy and a girl on a school bus stranded on a road with other cars beside a forest engulfed in flames.

Suddenly, all the people milling around or fleeing on foot from the fire are attacked by four-legged foes who come thundering out of the burning tree line.

In the chaos of this deadly stampede, wolves slash and bite some of the teens. Over the next few hours, they come to the realization that they have become werewolves.

By the end of Episode One, four of them are seen banding together to form -- you guessed it -- a teen wolf pack!

It is no coincidence that the two principal teens of Episode 1 are the children of broken homes. Who better to become werewolves in a new teen horror series?

The girl lives with her father and her autistic kid brother and not only resents her dad, but appears to really hate his guts.

The boy teen ends up in an overrun emergency room with his bite wound and dreads the arrival of his divorced parents because whenever they are together, it raises his anxiety level. As we already learned in the premiere episode’s opening scene, the boy suffers from acute anxiety.

In the chaos of the fires and the attacks from the beasts of the forest, the roads are choked with panicked townsfolk, while the teen wolves take to a portion of the woods where they seem unbothered by trees on fire.

So, with all of these teens becoming werewolves, why is there a photo of Sarah Michelle Gellar at the top of this TV Blog? It is because she is the best-known of this show’s cast members.

Will she now slay werewolves? This remains to be seen, but in Episode One of “Wolf Pack,” she is introduced as an arson investigator who feels the fires were deliberately set by someone.

The premiere episode of “Wolf Pack” does not lack for excitement. But by the episode’s end, I found myself wondering: OK, these kids are werewolves. Now what?