Ugh, There's People Vomiting -- And It's An Ad? 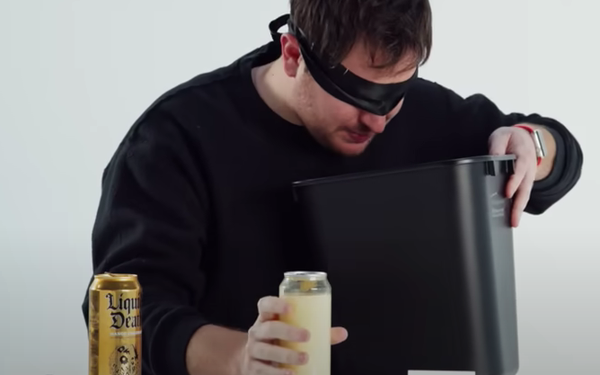 Can a brand “flaw” also be an attribute to help inform effective advertising and marketing?

Yes—if you use the right kind of flaw, based on behavioral science, according to MichaelAaron Flicker, founder of the XenoPsi agency and co-founder of the newly formed Consumer Behavior Lab.

In a commercial dating to 1999, Guinness—knowingly or not—used the brand flaw principle to dwell on the time lapse between ordering it at a bar and waiting for the foam to settle. Most of the 1950’s style, black-and-white ad features surfers who know that “good things come to those who wait.”

For Elijah Craig, having a more distinctive bottle helped the brand ride the wave of bourbon popularity.

Liquid Death is using a psychological observation called “price relativity” that comes to life in an extremely weird focus-group that pits the brand’s $1.99 tallboy to “the most expensive beverages on earth.” Upon sampling a tallboy of lobster Béarnaise sauce ($50) or beluga cavier ($580) some of the focus-group participants gag and/or vomit.

In this interview—edited for brevity and clarity—Flicker shares some insights from Consumer Behavior Lab, which he co-founded last November with Richard Shotton, the author of “The Choice Factory.”

CPG Insider: You refer to what Guinness did as the “pratfall effect.” Please explain.

MichaelAaron Flicker: I think the cool thing about Guinness is that they took something everyone knew to be true—When you order it in a bar, you have to wait for the foam to settle before you drink it—and put it front and center in the ad. That gave them an immediate connection to the consumer to then deliver more messaging. It opened the door for them to make it a brand benefit: Good things come to those who wait. People who sit in a bar and wait for the foam to come down know they’re getting a better, higher quality product.

CPG Insider: Do you think the brand’s creatives knew they were using behavioral science?

Flicker: These are established academic studies that were well known and published. Whether the folks who made the Guinness ad knew about them is anybody’s guess.

CPG Insider: What did your agency do for Elijah Craig?

Flicker: In 2013, the bourbon boom was happening, but this company wasn't getting the sales all its competitors were. In our consumer research, everybody said the same thing: It looks good and tastes good.

The more we dug, the more we realized when consumers looked at the bottle, it didn’t read as a bourbon bottle or the bourbon category. It was a behavioral science insight called unintentional blindness. As shoppers were walking past the shelf, it reminded them of a rum bottle, so they would immediately discount the brand before they would even buy it.

So we slenderized the bottle, brought in more bourbon cues, and gave it much more of a presence on shelf.

CPG Insider: Liquid Death is no stranger to bizarre, engaging ads. What’s your take on the brand’s messy focus group?

Flicker: The brilliance of the Liquid Death campaign is that it taps into a psychological observation called price relativity. This is the idea that consumers don't weigh up prices in an absolute fashion. Price perceptions are relative—an item is a good or bad value depending on what we compare it to.

Liquid Death is using a very tried and true bias here—which is if I compare myself to all of these much fancier things, then $1.99 feels pretty reasonable. That's interesting for brands because if you can change the comparison set, you can change willingness to pay by orders of magnitude.