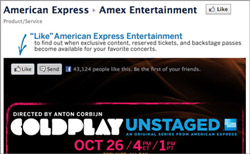 American Express is joining with Billboard to launch an entertainment channel on its Facebook page that will provide cardmembers with exclusive ticket offers and other specials.

Consumers (including non-cardmembers) can "like" the Amex Entertainment Channel in order to engage with the financial services brand. By liking the page, they gain access to exclusive ticket offers, insider updates and innovative experiences with some of the biggest names in music. In order to take part in the ticket offers, an American Express card must be used at time of purchase.

Coldplay is the first artist to be featured. The music group will be performing on Oct. 26 for an American Express Unstaged Live VEVO event on YouTube.

Content on the channel is being created in partnership with Billboard and Billboard.com. Billboard’s Facebook page will also feature the Amex Entertainment channel. Via the Facebook status feed, consumers who have “liked” the channel will receive real-time updates on upcoming ticket offers and experiences from American Express and exclusive content from Billboard.

The channel provides a destination for fans to interact with each other and their favorite musical artists, says Pepper Evans, American Express vice president, digital brand and social media development. Billboard’s credibility and creativity will drive more visitors to the site, she adds.

Features include a “Press Pass Challenge,” which is moderated by Billboard. Fans can submit questions to Billboard.com Editor M. Tye Comer to use during an upcoming interview with Coldplay. Members of the Amex Entertainment community can vote for the questions they would most like to see Comer ask the band. The fan who submits the winning question will receive two tickets and backstage passes to an upcoming Coldplay performance.

Via the cardmember Box Office on the channel, fans of the channel will be the first to know about advance, last minute and preferred seating ticket offers and music experiences. For example, fans of the Amex Entertainment channel were the first to learn about an exclusive opportunity for American Express cardmembers to purchase last-minute tickets that were just made available to see the Paul Simon: So Beautiful or So What 2011 concert on Oct. 11 in Las Vegas.