Kraft Brands Go All Out For Halloween 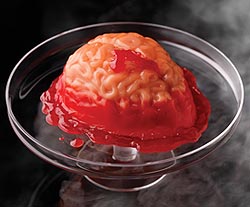 This year, Kraft Foods brands are on a mission to get moms and kids to think about more than just candy when they think Halloween.

Jell-O, for example, is giving new meaning to the term “brain food.” Through Oct. 31, the brand is offering a free Jell-O Halloween Brain Mold (consumers pay a few dollars for shipping). The mold comes with an eight-page recipe booklet for creating ghoulish gelatin brains -- including a bright-green Frankenstein version -- and other holiday tips.

The idea seeks to capitalize on a resurgence of interest in Jell-O/gelatin molds (restaurant usage, mold competitions, etc.) to lift sales during a holiday that’s not necessarily Jell-O’s biggest, says Michael White, the brand's senior associate brand manager. The brain mold was the winner among various Halloween mold possibilities tested with consumers.

Jell-O has used its own Facebook page, as well as Kraft's Facebook and Twitter presences, email promotions to opt-in, and outreach to mommy bloggers to drive consumers to jellomoldshop.com (linking into the Kraft branded-merchandise online store) to order the brain molds.

In addition, Jell-O created a special mobile microsite for ordering the molds and viewing videos about how to use them. Promotions on packages are driving consumers to scan a QR code or text the word “mold” to connect to the microsite (which is also part of a Halloween area on Kraftrecipes.com).

This isn't Jell-O's first seasonal mold, but the expanded “grassroots” outreach is paying off, with consumers ordering about 33,000 thousand brain molds to date, versus about 12,000 of the brand's less-promoted July 4th flag mold, according to White. Moreover, early data indicate an uptick in the brand's gelatin sales during the weeks leading up to Halloween, he reports.

Jell-O will build on the Halloween promotion in marketing a new 2011 holidays mold and an increased number of seasonal molds in 2012, White confirms.

Meanwhile -- following in the footsteps of Oreo, which is marking the 20th year of its Halloween Oreo (orange cream inside) -- other individual brands are promoting seasonal varieties that grab moms' attention in the aisles and through seasonal displays and offer new occasions for well-known products.

Kool-Aid has revived its Ghoul-Aid Scary Blackberry variety (orange powder that turns dark purple when water is added), which hasn't been available for a decade. The packaging features Kool-Aid Man in vampire costume.

The revival reflects Kool-Aid's recognition that flavors -- and particularly flavors that are no longer available -- are the #1 topic of discussion on the brand's Facebook page, according to Matt Smith, associate brand manager, powdered beverages for Kraft.

In late September, Kool-Aid began building anticipation by challenging Facebook fans to guess which classic flavor it was bringing back, gradually narrowing down the possibilities until Ghoul-Aid was revealed. The flavor's limited availability has caused fans to search local stores for the beverage, Smith reports.

Kool-Aid is also sponsoring this year's Haunted Hayride and Block-Party in Sleepy Hollow, N.Y., where Kool-Aid n will be on hand to mingle and dispense samples.

Mallows is offering Jumbo Pumpkin and Pumpkin Spice varieties for use in hot chocolate and desserts, as well as snacking.

food, holiday, promotion
1 comment about "Kraft Brands Go All Out For Halloween".
Check to receive email when comments are posted.
Next story loading