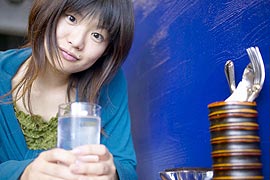 Beverage sales are declining in restaurants, and diners’ increasing propensity to order tap water is one big reason.

Since 2006, restaurant traffic has declined by 1%, but total beverage servings (excluding tap water) have declined by 6% (2.7 billion servings), according to a new report on foodservice beverage trends from The NPD Group.

Meanwhile, tap-water servings have increased by 2.8 billion, and now account for 8% of the 50 billion beverages served each year.

While saving money in tight times is obviously one significant contributor to these trends, there are also other factors at play.

The decline in beverage orders has been driven by the largest categories, carbonated soft drinks and brewed coffee (together, these represent 49% of all servings). And while cost was one reason cited by consumers for not buying soda and other beverages seeing sales declines (NPD surveyed 5,500 adults), soda sales were already in decline even before the recession, points out the report.

At the same time, with the exception of iced tea, most beverage categories that are on the upswing are newer ones, such as smoothies, iced/frozen/slushy drinks and specialty coffee drinks. Growth-drivers include new flavors, new versions of existing beverages, addressing taste interests and fresh preparation.

“A key learning from this report is that much of the decline in beverage servings is tied to the price/value relationship the consumer perceives,” says NPD restaurant industry analyst Bonnie Riggs, who authored the report.

“Some declining beverages will fare better as the economy recovers, but beverage providers will need to address consumers’ concerns and poor value perceptions to stem further losses,” Riggs adds.