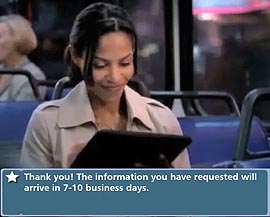 Looking to make a name for itself in the crowded (and somewhat controversial) world of online education, American Public University is embarking on a national advertising campaign to generate leads from “serious learners.”

“APU has been around for nearly 20 years, but they’ve never done any mass media advertising,” Patrick Hardy, executive creative director of Tierney, the agency behind the campaign, tells Marketing Daily. “They felt now was the time to tell their story and make a name for themselves.”

Three television commercials from Tierney in Philadelphia showcase three determined types of people: a woodland hiker, a storefront entrepreneur and an office worker, encouraging them to (respectively) “understand the complexities of national resource management,” “discuss sustainable design with a professor,” “to develop a business plan to earn a Master’s degree.”

“Their prospective students are serious learners,” Hardy says. “We wanted to capitalize on that and show thoughtful people on a thoughtful journey.”

The campaign, which carries the theme “Ready when you are,” also references certain “validators” for the university, including recognition for best practices in online education and partnerships with businesses and government agencies.

The television commercials will run in 18 select markets. In nine of those markets, including Philadelphia and Sacramento, the commercials will employ a “request-for-information [RFI] technology, offered through Comcast, which allows viewers to use their television remotes to request more information. Although the spots have only run for a little while, the projected response for the RFI commercials is 35 or more leads per market per week.

“Ultimately, we’re going to be judged by the amount of leads we generate,” Hardy says. “[Through RFI] we’re building that response mechanism into the ads.”

For the spots using the RFI technology, a pop-up appears on the screen, exhorting viewers to click “Ok” on their remotes. In non-RFI markets, pop-ups simply won’t appear. In addition to the television campaign, APU will run a national print campaign to run in 80 publications across 10 vertical trades (such as business, education, environmental sciences), as well as two radio spots and a digital campaign.