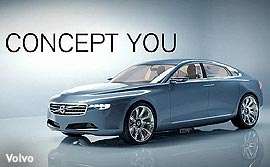 In recent years, Volvo Cars has taken incremental steps to move away from a somewhat co-dependent relationship with Safety, the laurel upon which the hitherto tweedy brand has rested for years. This past August, the brand announced a new brand strategy that suggests the company is ready to move on, or at least make safety part of a more comprehensive idea. After all, safety just isn't so unique anymore, as even sub-compact cars are rolling out of showrooms with more airbags than a hovercraft.

Richard Monturo this year became Volvo Car Corporation VP, global sales and is the first person to hold that post since the Gothenburg, Sweden-based automaker was acquired by Chinese car company Zhejiang Geely in 2010. He is also behind the wheel of the company's efforts to build its share of the luxury market worldwide. He tells Marketing Daily that such an effort requires both internal and external changes in brand navigation.

Says Monturo, former executive director of global strategy, at Miami, Fla.-based La Comunidad, of the new position, "It plays a role in product development, design, and marketing," he says, adding that the brand strategy is also multifaceted. "It's true to our roots but allows us to move up market as a luxury alternative to the Germans and Japanese."

Monturo says the differentiator for Volvo is an anthropocentric philosophy that incorporates safety but moves beyond it. "It allows us to put more emphasis on design -- on Scandinavian flavor; consumers have said they felt the design and engineering of competitors wasn't human centric. So what we are after is the expression of Volvo as a very 'human' kind of car company, and that permeates everything we do."

As such, Volvo is doing a lot more customer-immersion and research programs, per Monturo, who says research is playing a bigger role in product development. "We are doing a lot more creative research." He says that at this week's Los Angeles Auto Show, Volvo is shepherding a customer group of high-net-worth influentials around high-end retail venues at Century City and Rodeo Drive and then to the auto show itself.

"We are taking them around the show, then to our booth and then upstairs to debrief my management team, including [CEO] Stefan Jacoby as to what they feel about Volvo." The company will film that encounter and show it to its global cohort.

"It's my intention to do [these kinds of programs] constantly," says Monturo, who says there is room in the luxury space for the brand. "Quite simply, as much as we are talking about the economy, you continue to have more and more people moving into affluent vehicles all over the world, including in the U.S. And the composition of people moving into luxury is increasingly multi-cultural. So we will be more inclusive of African Americans, Asians, Latinos."

Although the new position hasn't expressed itself in marketing communications just yet, expect a more premium look and feel. "It will look very comfortable inside a Vanity Fair as much as Road and Track," says Monturo, who ads that "Designed Around You" will be about actions as much as messages.  "Hyundai really changed the table stakes with programs like Assurance, so I encouraged marketing team to do something first and then talk about what you have done. So we will be focused on initiatives that embrace the customer and invite them to participate in our community."

He says social media will be central to that effort. "But we want to be like Andre Agassi, with a great return of serve. In other words, when we hear buzz, I want my people listening constantly and knowing how to respond in a very inclusive kind of way."

More purely lighthearted efforts will be part of that, evinced by a viral video the company made when Volvo won J.D. Power & Associates customer satisfaction ranking in the German market. "I wanted to publicize that to the rest of the world, so I ran a viral video thanking the German customers, but also Audi, BMW, Volkswagen, Opel, Porsche and Mercedes-Benz, but in a fun way."

Monturo says Volvo will use television more tactically to reach targeted demographics and regions, more test-drive events in the U.S., trade shows as venues to show at the Volvo stand the architectural expression of the brand, "as a kind of dry run of how dealerships might look."