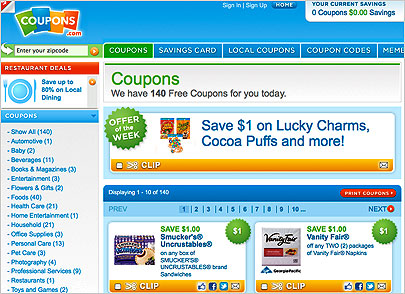 Saving money has become a bit of a game for many consumers. The more that is saved at the point-of-sale register, the bigger the smile on their face. Serge Traylor, brand manager of communications for the battery maker Energizer, knows this well.

Traylor said the company ran a two-day campaign on Facebook over a month ago. The Energizer Bunny Facebook Fan page gained 60,000 fans during the promotion, with a bit more than 75,000 downloaded coupons that enabled consumers to save $3 on an eight-pack of batteries. Facebook members had to Like the page and fill out information to receive a coupon in the mail.

Traylor plans to run a similar promotion again, tying it to the social-media strategy for the upcoming fiscal year. One of the biggest benefits of the promotion comes with tying the code on the coupon back to physical sales.

Prior to the self-serve model in Facebook, brands had to work with Web developers to program within the social network, and marketing agencies had to implement the workflow and design -- a time-intensive and cumbersome process, especially when it comes to having the ability to message to consumers about the status of a coupon.

Americans are clipping more coupons. Sales driven by coupon use on RetailMeNot.com rose 82% year-over-year in the three months prior to the November start of the holiday shopping season. The site aggregates coupons from Amazon, Target, Barnes and Noble and other top retailers and consumer product goods companies.

When a coupon has reached its predetermined print limit on Facebook through the Brandcaster Social platform, the offer is automatically removed. Consumers receive an alert that the coupon has reached its print limit and that they should check back later. However, the inability to stop issuing coupons in the middle of the night when the platform reaches its quota could cause marketers to see a full wall of negative comments in the morning -- a benefit to the platform, said Steven Boal, Coupons.com CEO.

An earlier version of Brandcaster serves coupons from about 600,000 Web pages. The new version for Facebook keeps the brand Fan on the page. Boal said the platform also supports reports -- not just about the market and the demographics, but the types of Fans and friends of friends resulting in printed coupons.

Last year, $26 billion was spent in online advertising -- but packaged goods only comprised a fraction, he said, because they had no way to measure sales resulting from online or Facebook coupons.