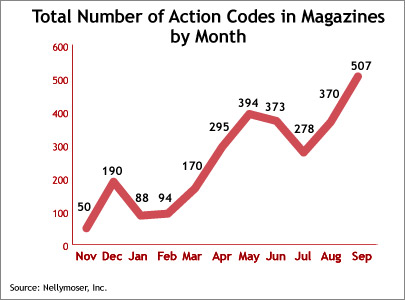 This is not an optical illusion. There really are black squares and tiny colored triangles dancing before your eyes as you thumb through recent magazine issues. According to a survey of the top 100 magazines in the U.S. by circulation from Nellymoser, the number of “mobile action codes” rose from 88 in January issues to 507 in September issues.

On a quarterly basis, the number of 2D mobile codes in magazines grew from 252 in Q1 to 1155 in Q3 (up 228%). Some key campaigns in Q3 involving in-book codes for sweepstakes included an August issue of Allure that generated 576,000 scans to code provider Microsoft Tag and an issue of This Old House that generated 234,000 scans, according to reports.

At Allure, this was the second annual August code campaign that was tied to daily sweepstakes entries. “This August saw an increase in scans: 576,000 in 2011 vsersus 444,500  in 2010 for Allure,” says Marie Jones, managing director, digital media, Allure.

The bump in activations came even in a program that had fewer codes than the 2010 August issue. But in a new twist on code use, Jones reports that “device to device” scanning is proving especially powerful. “Readers of our digital edition scanned five times more than readers of the print edition,” she says, despite initial worries that people would not activate codes that appeared on displays rather than on paper.

Overall, advertisers are embracing the mobile scan format more aggressively than editors. Nellymoser reports that 6.52% of ad pages in the August issues this year and 5.76% of ad pages in the September issues of the 100 magazines surveyed carried codes.

The share of codes being leveraged for advertising purposes is rising sharply, even as editorial uses of the codes has remained relatively static this year. In the September issues, 482 of the 507 codes found were in ads, with only 25 enhancing editorial material.

“The 476% growth in action codes [January vs. September issues], such as QR codes, is being driven by advertisers,” says study author Roger Matus, EVP, Nellymoser. “This shows that codes are no longer just a technology. Brands would only spend their advertising dollars on the codes if they are seeing value in the results."

While there is still some fragmentation in the market among code types used in magazines, QR codes had a 62% share in Q3 compared to 30% using Microsoft Tags, 4% using SpyderLynk SnapTags, and 3% using JagTag solutions.  The market share has remained fairly constant throughout the year. Editors seem to favor MS Tags (88% of editorial codes in Q3). SpyderLynk and JagTag popped onto the radar by virtue of select campaigns for a small number of magazines or ad clients.

With the exception of This Old House, the title with the second-highest number of tags in Q3, women’s fashion, beauty and celebrity books dominate the field of books hosting codes in editorial or ads and promotions: Glamour, Allure, InStyle, Us Weekly and Real Simple.

“People tend to assume that action codes are used mainly by geeks,” says Matus. “But in reality the top magazines and the top brands are in beauty, fashion and home. That tells me the demographic is mostly female and interested in more than technology.”

Among brands leveraging codes in Q3, Revlon led the pack with 37, followed by Cuisinart with 26, Garnier with 25, Delta with 20 and John Frieda with 19.

As any mobile code user will attest, this medium is still struggling to give the consumer a rewarding experience. Marketers apparently consider video the most important payoff, so 47% of the codes in Q3 led to a streaming media experience. Magazines like Allure have discovered that sweepstakes entries and easy subscription opt-ins are among the most effective ways to engage users; they account for 34% of campaigns.

Nellymoser finds there is also greater use of “smart sweepstakes” entries in which the program remembers and recognizes the users’ data upon multiple entries. Social media prompts to share links were used in 24% of campaigns. Only a small percentage of codes -- 16% -- are prompting people to buy something via their phones, and even fewer (12%) are offering coupons.

On the whole, mobile codes in magazines are being used by marketers to enhance the existing print creative with multimedia or to generate leads through promotions.