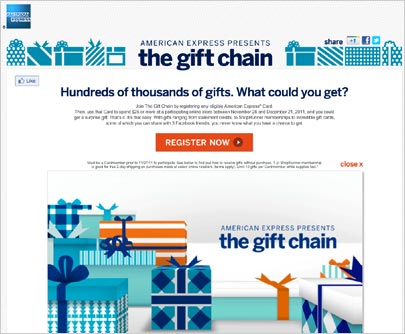 In an effort to energize American Express as an online shopping tool, the company and popular online merchants are giving away $20 million in surprise gifts, many of which can be shared with friends via Facebook.

Called the Gift Chain, the new digital program gives cardmembers a surprise each time they shop at a participating online retailer and spend at least $25, with holiday treats ranging from Dunkin’ Donuts coffee, Godiva chocolate, and  $5 statement credits, all the way to $500 American Express Gift Cards. Shoppers can even share some of those gifts with up to three Facebook friends.

“The idea was to deliver value to both our cardmembers and merchants, especially since we know how important online shopping is going to be this holiday season,” says Kathleen King, VP/strategic merchant marketing at American Express, citing National Retail Federation estimates that some 36% of shoppers plan to do their shopping online this year, spending 22% more than they did in 2010.

Besides the obvious benefit of driving traffic to its merchants’ website, the program also extends the American Express’ digital muscle “with a fun component, and the idea of sharing those gifts with friends adds a nice gaming element to it,” she says.

King adds that AmEx is promoting the Gift Chain using online media, internal channels, card member statements and emails, and Facebook. “It’s so important for us to go where our cardmembers and merchants are, and that Facebook really resonates. We’re trying to deliver more value where people are already connecting.”

Cardmembers register first, and the promotion is scheduled to run between Nov. 28 and Dec. 21. Once a cardmember makes a qualifying purchase, they get an email describing the gift. Participants include Dell, Neiman Marcus, Nike, Toys“R”Us, Walmart.com and Zappos.