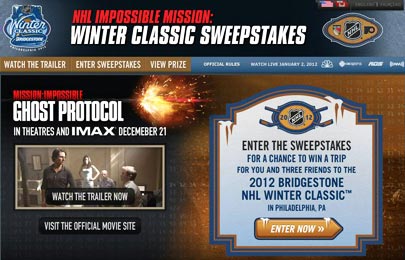 The National Hockey League (NHL) and Paramount Pictures have entered into a strategic marketing partnership in support of "Mission: Impossible - Ghost Protocol" Tom Cruise picture. The movie premiers on IMAX and on other large-format screens on Dec. 16 and then everywhere on Dec 21.

The NHL -- along with North American broadcast partners NBC, Versus, TSN, TSN2 and NHL Network -- will promote the film across its platforms, integrating the teamwork narrative central to the “Mission: Impossible” series into game broadcasts and online features, per the league.

The "NHL Impossible Mission" theme-line will be in NHL game broadcast segments involving players and coaches. The NHL partnership with the film also includes co-branded 30-second and 60-second TV spots featuring game footage and scenes from the movie. Those ads, which also tout a co-branded sweepstakes, will air during game broadcasts and pre-game and post-game shows, per the league. Dasherboards in select NHL arenas will also feature branding from the film.

The "NHL Impossible Mission" sweepstakes, which is at NHL.com, offers as grand prize a trip for four to attend the 2012 Bridgestone NHL Winter Classic between the New York Rangers and the Philadelphia Flyers on Jan. 2.

Dave Lehanski, group vice president of integrated sales at the NHL, tells Marketing Daily that this deal is not the first such program for the NHL, but it is the largest. "A partnership of this level and degree ... we haven't done anything like it," he says. "With the scope of media support, the multiple broadcast partners in the U.S. and Canada, the digital and promotional elements, and the commitment from the studio and agency makes it the most pronounced program we have done."

Lehanski says the partnership makes sense because of the timing, the complementary fan demographics and the film's themes. "The timing of the NHL Winter Classic and the release of film lends itself to this partnership; the overall audience for the film -- young, savvy males -- is our sweet spot as well. And the content of the movie being about teamwork -- that was a concept that was key for us to draw out and promote."

He says the flexibility of NHL's media partners was also critical, since the partnership came together relatively close to the Winter Classic. "It was a bit of a scramble to get it going, but it's nothing our media partners haven't done before."

The NHL produced the co-branded spots and promotional microsite in house with the players association.

The partnership will also have legs in Canada, where NHL.com and French-language network TSN.ca will have an "NHL Impossible Mission" theme driving consumers to NHL.com/ImpossibleSweeps. The league says NHL.com will unveil branded editorial features every Monday, Wednesday and Friday.  NHL.com and TSN.ca will do a "Mission: Impossible - Ghost Protocol" takeover on Dec. 7, with the film dominating both Web sites.

NHL Network’s daily programs “On The Fly” and “Cisco NHL Live” will feature "NHL Impossible Mission" segments, with the film as presenting sponsor of the Dec. 20 broadcast of “On the Fly.”