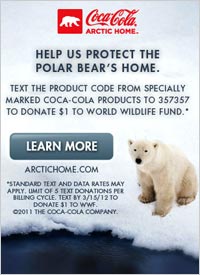 Those white Coke cans on retailer shelves this holiday season are drawing attention and questions from puzzled shoppers who are used to seeing the century-old red branding on the soft drink. Coca-Cola has come up with multiple ways for consumers to better understand its “Arctic Home” promotion and charity project by using their mobile phones.

Working with shopping rewards app CheckPoints, shoppers are able to scan the can in the store and go directly to the dedicated site that explains how Coke is soliciting donations to a fund that helps preserve the polar bear’s natural habitat. Users of the CheckPoints app can make donations on the spot to the fund and also receive rewards points that can be put toward a range of products, from gift cards to iPads.

Coke gets the ancillary benefit of having consumers pick up the product, a bonus that mobile scanning schemes confer on participating brands, according to CheckPoints. “People are just more likely to buy something if they have it in their hands and then if the brand can incentivize them,” says CheckPoints Director of Communications Dave Heinzinger.

CheckPoints is among many mobile apps vying for the consumer attention. Most often compared to ShopKick, which also offers a points-based rewards system, Heinzinger says his company’s model is aligned more with the brands than with the retail location.

“Our partnerships are more focused on products. We’re not limited to participating retailers.” The Coke program, for instance, works with any white Coke can in any location -- whether in the store, at a diner or at home. “We are available on over 1 million devices,” Heinzinger says.

The company has deployed multiple campaigns for Kimberly-Clark, Unilever, P&G, Tyson’s Foods and Energizer batteries. In many cases, the user of the app is incentivized with rewards points to scan products, an action Heinzinger says is critical to engagement.

In the case of Kimberly-Clark, a Huggies and Kleenex promotion tied the product to the June release of "Cars 2." The brand used the CheckPoints app to get moms into the store and hunt for specially marked Kimberly-Clark products. CheckPoints users got a push message alerting them to the offer, which worked at Wal-Mart. Tens of thousands walked into the stores with their CheckPoints apps to get further details. Not only did 120,000 Kimberly-Clark items get scanned over five weeks, but the company calculated a 782% ROI on 18,755 additional purchases because of the program.

By leveraging a product rather than a retailer focus, CheckPoints is also trying to create mobile models that allow for brands to poach customers. The app recently added a Scan@home feature that rewards people for scanning items they have on their pantry shelves. “We think it is valuable for brand partners,” he says. “If you have French’s mustard or Heinz Ketchup, then rivals can market to you. We are calling them ‘conversion campaigns.”

Mobile gadgets and their ability to interact directly with products opens up new marketing and engagement models,” says Heinzinger. “This is something that has never been possible, and mobile brings it to light.”