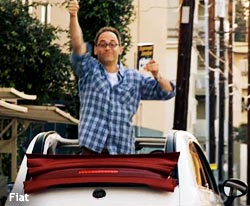 The effort constitutes a re-launch of a long-running online comedy series. The episodes "airing" today launch the fifth "season" of the show, which dissects the neurotic foibles of Wain through his daily affairs, literally.

Fiat's involvement includes a media campaign and brand integration. The show has new episodes every Monday in December, with the season finale on Tuesday, Jan. 3.

The show, set in New York, involves Wain's search for love, and his efforts to untangle it with coworkers at his place of work: an apparel sweatshop. As Wain is less attractive than Larry David (if that were possible) and more of a nebbish (ditto), the sell is the cast of human backboards for his un-medicated issues: the supporting cast features regulars from offbeat parody comedies like Adult Swim's "Childrens Hospital," in which he's involved as a writer and director.

The Fiat 500 is integral to the show, as Wain drives around in it. The car also gets parking space via banner ads on the page framing the video window.  The 500 is in six episodes of the season, per Fiat.

“The Fiat Brand continually looks for ways to help increase awareness for the brand and the Fiat 500 models in a manner that is uniquely engaging to our consumers,” said Casey Hurbis, Head of Fiat Brand Communications, in a statement. “Wainy Days allows the brand to reach a new audience and introduce them to [to Fiat] in an entertaining and humorous style.”

The automaker -- which has just one model in the U.S., of which is has sold about 17,444 year to date through November -- has focused a lot of its marketing efforts on offbeat, urban-centric programs like the live storytelling performance series "Alternative Routes," and experiential programs designed to get the cars in front of consumers, and consumers into cars. Fiat launched its first TV ad campaign early this year, "Simply More," and followed up by signing Jennifer Lopez as brand ambassador and spokesperson.