Jaguar Says 'Welcome To Our Jungle' 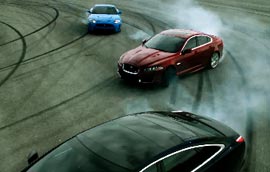 Jaguar is edging into a new advertising position in the U.S. with a new TV spot that uses its performance cars to spotlight the brand. The 30-second spot for the Mahwah, N.J., U.S. sales arm of Jaguar is also the first ad from Jaguar’s new global ad agency of record, L.A.-based Spark44. Jaguar Land Rover didn't have to look far for the new agency for its $100 million global account, since it's an in-house project launched in February.

Jettisoning Euro RSCG for the homegrown shop was consequent to an early 2010 strategy move for the Jaguar Land Rover group that put a German team led by Carl-Peter Forster, and BMW expat Ralf Speth at the helm. Speth had run Land Rover when that brand was a BMW marque. Then, when Ford chief Jacques Nasser bought both brands early in the Millennium, making them part of the multi-brand -- and now-defunct -- Premier Automotive Group (PAG), based in Irvine, Calif., Speth stayed in the Land Rover driver’s seat, ultimately becoming production manager for PAG.

Land Rover and Jaguar have returned with chutzpah from the brink both in the U.S. and elsewhere. Since he took control, Speth has scrapped plans to close manufacturing capacity, revamped the model lineup, and served up some legitimate hits for both Land Rover and Jaguar, such as the Jaguar XJ, Land Rover Discovery, and Range Rover Sport (whose sales last month were up 37% versus last year), and the new Evoque, which started rolling into dealerships this fall and has gotten a lot of auto-scribe praise.

Land Rover Jaguar combined North American November sales improved 17% from last and are up 10% in the first 11 months.

The new Jaguar ad showcases Jaguar's XFR, XJL Supersport and XKR-S cars by animating them, as in "animal" (as in “jaguar”). The cars seem to growl when they rev their engines and carouse about various places starting with a redwood forest, then urban streets. They chase each other through the various urban and rural settings in footage set to flamenco guitar. Voiceover supports that imagery: "They are supremely agile; remarkably powerful and fiercely independent. This is Jaguar at play." The theme line: "Welcome to our jungle."

The spot debuted on the NFL Network on Dec. 1 and will also air, in the U.S. only, on national cable and locally, including CNN, ESPN and Comedy Central.

David Pryor, brand vice president of Jaguar North America, tells Marketing Daily that Jaguar last had a televised TV campaign in the U.S. this past spring. "Since then, we have maintained our presence on television and are now increasing that presence with this new ad."

Pryor adds that the spot also points to a new direction for the brand's advertising, although it supports the current model-year 2012 campaign. "The current campaign includes digital, print and an enhanced social media strategy." He says the automaker recently launched a refreshed Jaguar USA Web site, and is partnering with several print publications “on added-value programs and high-impact custom units.” Pryor adds that within the last four months, Jaguar hired Carrot Creative as U.S. social media agency of record, and launched Facebook, Twitter and YouTube for Jaguar North America.

In addition, Jaguar is hosting two consumer test-drive events in Dallas and Houston “that will provide attendees with a deep appreciation for the entire model lineup and for the brand,” he says. “While at the drive, they will learn about Jaguar’s four key values: performance, style, technology and refinement."