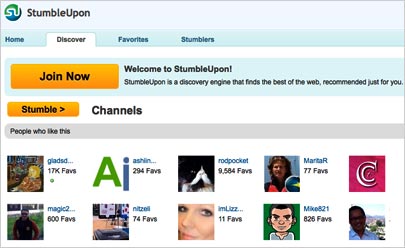 Content discovery engine StumbleUpon has launched an updated version of its service featuring a more visually engaging look and feel and new “Channels” for specific Web sites, brands and celebrities. Other changes include an expanded search capability and a refreshed user profile page.

The redesign, which even extends to a new red-orange company logo, is the first major overhaul of the site to date and reflects user feedback and testing over the last year. “We wanted to make it simpler and more in line with how people actually ‘stumble,’” said Garrett Camp, co-founder and CEO of StumbleUpon. He is referring to how people use the service to discover and rate new sites, videos and photos in areas of interest.

The utilitarian StumbleUpon home page has been replaced by a photo-centric design highlighting popular content categories, such as photography, humor and cooking, along with the new “Explore” search box in the upper-right corner of every page.

The upgraded search function allows users to look up hundreds of thousands of topics instead of being limited to only about 500 broad subject areas. They can now drill down deeper by using more specific key works like “pug” instead of “dogs,” or “Costa Rica” instead of “travel.”

The centerpiece of the revamp, however, is the catalog of 250 channels that now appear under the Discover tab and feature a range of specific sites and brands, including CNN.com, Campbell’s Kitchen, Gilt City, Hulu, ESPN and Grooveshark. StumbleUpon also recommends certain channels based on the type of content users have previously indicated they like.

The idea is to create some equivalent of brand pages on Facebook or company pages on LinkedIn. “We’re allowing people, sites and brands to automate the process of getting content into the StumbleUpon process,” said Marc Leibowitz, vice president of marketing and business development at the company.

Whether providers populate their channels with automated or manually curated content, StumbleUpon will surface the most relevant material from selected channels based on a user’s expressed likes or dislikes, he added. While launching with a group of 250 branded sites, the company plans to gradually expand the roster over time.

Like Facebook, StumbleUpon is not charging companies or individuals a fee to set up a presence on the site. But it is hoping if StumbleUpon helps drive traffic to their other online properties, they will be more inclined to try the company’s Paid Discovery ad option. Camp noted that some of the channels have drawn thousands of followers during the beta testing period.

The bare-bones user profiles on StumbleUpon have also gotten a facelift. They now feature thumbnail images of “Liked” sites, a left navigation bar tracking interests, channels and connections, and recommended “Stumblers” and interests for users to follow on the right side.

If the improvements lead to people spending more time sharing and seeking out new content, so much the better for StumbleUpon’s ad-based business. “We’ll look closely to see if people spend more time stumbling,” said Leibowitz.