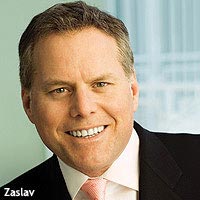 Chiming in with what other senior TV executives have said recently, David Zaslav, president and CEO of Discovery Communications, says advertising sales are slowing. But overall, things are not trending down.

Speaking at the UBS Media and Communications Conference, Zaslav says "there is a little bit of slowing in volume."

Discovery sold a lot of inventory in the upfront market and has little to sell in the marketplace. Fourth-quarter scatter prices were up 20% over pricing set in the upfront. Discovery sold most of its 4Q scatter inventory early on. Zaslav added that upfront cancellations are about at the levels it was a year ago at this time.

Still, TV advertising has been relatively strong overall -- which does not make sense with the weakness of the global and U.S. economy.

"It does feels like a disconnect from where the economy is," he says. "There is not an explanation about why that has happened. We do see a little bit of slowing, as I said. We don't quite know how to read that."

Regarding Discovery's highly analyzed OWN: The Oprah Winfrey Network, he says there is still a lot of work to be done. But advertisers and cable operators are committed for the long term -- especially since it still has a base of 80 million homes. He says cable operators might be nearing decisions that will give it some affiliate fees for the first time -- something the channel did not get in its previous incarnation.

Zaslav credits some signs of ratings life to "Oprah's Life Class,"  a show Winfrey recently hosted for an entire week, as well as one Saturday show, "Sweetie Pie's."

"Pie's" is a reality show about Robbie Montgomery, a 1960s backup singer and former "Ikette" of the Ike and Tina Turner Revue who opened a soul food restaurant in St. Louis. The show is grabbing some interest from urban audiences, he says. "The African-American community is finding OWN a little faster than the rest of America," says Zaslav.

The network will continue to rally around the channel's brand line: "Live Your Best Life."

Diversification has helped Discovery Communications over the last few years with marketers, especially with the growth of channel TLC, a heavily women-oriented network. Discovery networks were mostly a male viewers-centric operation five years ago. Now with TLC, "we get to see all the advertisers."