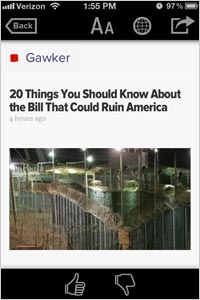 Two days after Flipboard released an iPhone version of its popular iPad newsreader app, CNN-owned rival Zite on Friday answered with its own free app for the Apple smartphone. Like its iPad predecessor, the Zite iPhone app creates a personalized digital magazine for users, based on their social networking and/or online reading habits, but optimized for the smaller device.

The compressed interface allows users to scan news quickly by swiping left to right through sections appearing at the top of the screen or through a carousel feature. But instead of swiping horizontally to turn to a new content page on the iPad, Zite iPhone users scroll vertically both to check headlines and read articles.

The same “Top Stories” section, compiling news items it believes will be most relevant, appears in the new app, which likewise draws on someone’s Twitter and Google Reader history to determine their interests. It also learns more about user preferences based on what stories they click on and how they rate them (thumbs up or down).

People can separately choose from more than 2,000 topics to fill out their personalized reader, which analyzes millions of articles across the Web to select the right material for a given reader.

Those already using Zite’s iPad app will be able to sync their profile to the iPhone version, accessing either device according to convenience. Zite CEO Mark Johnson said the iPhone app was developed with the understanding that people will more likely use it to check stories while on the go, rather than relaxing with the iPad app at home.

For that reason, the company focused on keeping the design clean and simple for the iPhone screen. It scrapped an early two-column display in favor of a single one accompanied by thumbnail images to evoke a magazine-style feel in miniature. Because there are so many more iPhone than iPad owners, Johnson also acknowledged that the new app will potentially expose many more people to Zite.

“We wanted to make sure as people are going through stories, they can read very quickly,” he said. Zite, which was acquired by CNN in August for a reported $20 million, has not revealed how many times its iPad app has been downloaded since its March launch, beyond 125,000 in the first week. Johnson also would not say how many users it has.

Flipboard -- which Zite is often compared to -- has been downloaded on 4.5 million Apple tablets, or about one in 10 iPads. But Zite also competes with a growing field of tablet readers, including Pulse, AOL’s Editions, and Yahoo's recently debuted Livestand.

In addition to going head to head with Flipboard’s new iPhone app, which added a “Covers Stories” feature similar to Zite’s Top Stories, it also must meet the standard set by the original iPad offering. That app has earned a rating of 4.5 out of five stars in the App Store, along with a devoted following.

While the CNN acquisition might raise questions about Zite’s direction, Johnson said the news giant has so far lived up to its promise to let the start-up continue to function as an autonomous unit within the company. “For now, things are going outstandingly well,” he said.

Having a corporate parent has also reduced pressure on Zite to monetize its product. Neither app includes advertising, and Johnson isn’t in a hurry to add any until it can be as personalized as the content it serves. “We don’t want to damage relations with readers, first and foremost, and adding advertising willy-nilly has the potential to do that,” he said.

Still, the company sees promise in adding branded channels on Zite, like those found on Facebook, StumbleUpon and Twitter. In that vein, it launched a new section this week featuring content from yoga gear retailer Lululemon Athletica. More branded channels are likely to follow, eventually providing a potential revenue stream.

Johnson said Zite also plans to roll out additional versions of its app for all major mobile platforms, including Android and BlackBerry in the next 12 months.