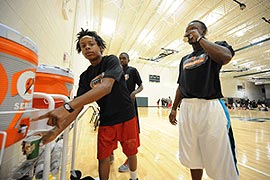 The National Basketball Association will be hitting the court with new sponsorship deals this week, starting with three expanded deals with Gatorade, Budweiser and AutoTrader.com. All have all signed on for multi-year deals, with Gatorade, the league's longest-running marketing partner, continuing as the Official Sports Drink Partner of the NBA and now its Official Sports Performance Nutrition Partner.

Budweiser's expansion with the NBA keeps it as Official Beer Partner of the NBA, dating back to 1998. The brand, which also has partnerships with 26 NBA teams, is launching fanexperiences at  Christmas Day games, All-Star Game and NBA Playoffs.

Since Budweiser is a sponsor of NBA telecasts on ABC, ESPN, TNT, and NBA Digital properties, it will create NBA-themed ads, packaging and point-of-sale materials at retail. In addition to the overall NBA partnership, AutoTrader.com, which has been a sponsor for the past five seasons, will continue as the presenting partner of the NBA Tip-Off show on TNT, as well as its presenting partnership of all pre-game shows on NBA TV, per the company and the NBA.

In addition to on-court branding, and brand exposure on NBA digital properties NBA TV and NBA.com, AutoTrader gets title sponsorship of the NBA Tip-Off presented by AutoTrader.com on TNT for the entire season. The NBA says AutoTrader.com will also advertise on NBA broadcasts on TNT and NBA TV.

The online auto shopping and research site will also sponsor the “Drive to the Finals presented by AutoTrader.com” fantasy game on NBA.com during the NBA Playoffs.  The game allows fans to select one NBA player they think will perform best in their respective game during the NBA playoffs, and each player can only be picked once. The person who accumulates the most points during the Playoffs will receive $25,000 toward a car listed on AutoTrader.com.

The biggest of the three partnerships in terms of international scope is Gatorade, which started backing the NBA 27 years ago. Gatorade will add activation in Brazil, Italy and the United Kingdom to its programs in Canada, Mexico, the Philippines and Puerto Rico.

In the U.S., Gatorade will put NBA players who have signed endorsement deals with the brand -- All-Stars Kevin Durant of the Oklahoma City Thunder, Dwight Howard of the Orlando Magic, and Dwyane Wade of the Miami Heat -- in advertising and promotions, per the NBA.

The PepsiCo sports-beverage division will also host several “Gatorade NBA Training Center” events prior to the start of the NBA season, plus grassroots events and pre-season games in international markets. The company says it will be an associate partner of a Jr. NBA event and of an NBA FIT event in the Philippines, and in Mexico, Gatorade will serve as an associate partner of an NBA 3x3 event and of an NBA pre-season game.