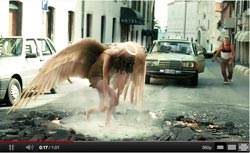 Ever wondered whether visual special effects (VFX) were only good for gussying up agency work? Such effects could be better at achieving certain campaign goals, according to new research from VFX provider GenArts.

Specifically, VFX were shown to drive a 13% increase in downloading a coupon, a 9% lower abandonment rate, and an increase in purchase intent of up to 12%.

As online video advertising expands, GenArts also believes that VFX will be necessary for brands to stand out.

“Video usage is expanding across all media, and it’s growing more difficult for advertisers to meaningfully attract their target audience,” says Katherine Hays, CEO of GenArts. “Advertisers are challenged to make their ads as effective as possible, but it’s not always clear which tools enable you to do that.”

GenArts used videos featuring sports lifestyle company Puma to verify the impact that visual effects have on the overall effectiveness of video promotions.

The resulting case study tested two versions of the same Puma sneaker promotion -- one treated with visual effects and one without. The effect-treated video outperformed the untreated constant and demonstrated significant increases in engagement metrics across the board.

“We’ve found visual effects to be an effective way to make videos of all types perform better and to help cut through in a cluttered marketplace,” said Antonio Bertone, CMO of Puma.