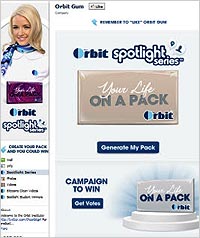 In the latest promotion for Wrigley’s fruit-flavored Orbit Remix gum line, the brand is encouraging fans to create individually customized package designs using an infographics app that draws on information from the user’s Facebook profile and his/her choice of one of the gum’s four flavors.

Fans anywhere in the world can use the app to generate unique pack designs, and U.S. residents can also opt to enter their designs for a chance to have them featured on Remix packages next year. A total of 60 winners will be chosen based on those who receive the most votes from the brand’s Facebook fans (you must "like" the brand to vote or enter). The promotion started Dec. 1 and will run through Feb. 28.

This means that Orbit, which retains all rights to the designs, may elect to introduce as many as 60 new Remix pack designs during 2012 (the winners are not guaranteed that their designs will be featured on actual packages). Each winner will also receive a check for $500.

The app was created by Evolution Bureau (EVB), working with digital artist Joshua Davis, who specializes in building algorithmic systems.

This promotion is the second phase of the Orbit Spotlight Series, a multiyear campaign for the Remix line.

The first phase was the Orbit Spotlight Series Design Contest, launched this past spring. College students in art, design and communications programs were encouraged to submit original pack designs for a new Orbit flavor, Melon Remix.

The eight winners were announced in November, and Orbit is currently rolling out all eight pack designs in various retailers nationwide, including Wal-Mart.