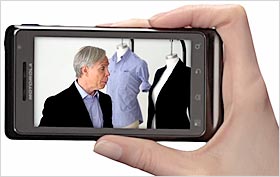 The past year may have been the year of the tablet, and the smartphone and the “third screen.” But if the top 10 read stories on my technology and electronics beats are any indication, marketers are still looking for the best ways to reach consumers with strong messaging, whatever the media.

Take the top story, New to Macy’s Spring Lineup: Custom QR Codes. With so many marketers trying to figure out how to get consumers to bridge the gap between the online and offline worlds, an innovative technique, like Macy’s “Backstage Pass” -- which gave consumers access to exclusive behind-the-scenes content and fashion advice via mobile 2D barcodes -- was a natural draw.

Similarly, stories about Sony’s social media-driven campaign to have consumers submit stories to be filmed and broadcast in 3D and a joint Intel and Toshiba project to create a suspense film through crowdsourced content, were all about finding innovation in unexplored territory. As every new technology hatches new ways to reach consumers, marketers and the brands they represent are naturally interested in groundbreaking ideas and envelope-pushing programs.

Yet, for all those programs, marketers haven’t lost sight of understanding that it’s not necessarily the project, but the way it connected with consumers that’s important. Some of the top stories picked out of the technology space were about what mattered to consumers, whether it was how to make messaging relevant in the mobile space, the idea that the smartphone has become a communication device for the whole family, the idea that consumers are willing to pay a premium for brands that add simplicity to their lives, or even just understanding that consumers are still using that old standby, the Sunday newspaper, to clip coupons during tough economic times. Even a story about the phenomenal viral success for a corporate video about a product as mundane as glass shows marketers still want (and need) to know what resonates with consumers.

Finally, in a year and a field dominated by Apple, it’s not surprising to see the company at the center of two of the most-read stories in the technology space. In both cases, however, the stories were not about Apple’s latest innovation or rumors about the newest must-have device. Instead, both stories concerned how Apple’s competitors could market against the company’s phenomenal buzz when it comes to smartphones. One story focused on how Android makers could focus on their positives (specifically network speed) to compete against the latest iPhone iteration. The other showed how one such competitor, Samsung, was going about it (by mocking the hipsters and “artists” who miss out on the Next Big Thing, because they’re waiting in line.)

Those two stories seem to prove that no matter how much everyone loves Apple, we still are looking for ways to take it down.