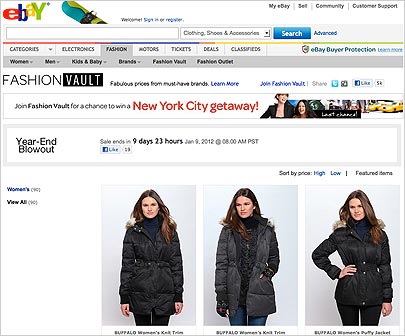 Now that the women of America have unwrapped their new iPhones or cashmere sweaters, they’re already thinking about dumping them someplace like eBay: A recent study finds that 75% of women think about resale value when shopping, up 10% from six months ago.

The study, from Women at NBCU, also found that 76% of the 2,000 women it surveyed report that they are buying and selling products either at online auction sites or sites where people buy directly from other consumers.

One-third of those surveyed say that sites like eBay (women’s third-most-visited site) and Groupon (women’s seventh-most-frequented site) have given consumers as much control as brands in setting the prices of products. And 22% think that within 10 years, the majority of purchases will be made between consumers, rather than between consumers and brands.

That thinking shapes their spending, with 66% of women saying they would rather spend $100 on a higher-quality product with a resale value of $35 after a year than $50 on a lower-quality product that would have no resale value after one year. And 89% would rather own and resell everything from entertainment systems, personal electronics, clothing, and furnishing to artwork than rent or lease it.

The study also points to women increasingly viewing themselves as curators, collectors and experts, rather than mere consumers. For example, 67% say they prefer a wardrobe with 50 carefully selected items to one with 500 items.  And they want to extend that expertise beyond their own closets, with 78% expressing interest in Web sites that allow them to vote on the products that brands offer for sale.

And when it came to selecting those pieces, respondents say “versatility” (defined as “a product that goes with everything”) was the most important factor, surpassing qualities such as “uniqueness” and “trendiness.”

research, retail, women
1 comment about "Auctionomics: Women Want To Sell Their Stuff".
Check to receive email when comments are posted.
Next story loading