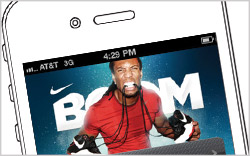 This year — considering the still-nascent state of mobile marketing — we had to ask exactly what it meant to be the best mobile agency, and R/GA gave us the answer...:

“Creative excellence in the work; innovation in the work; and diversity in the work,” says Richard Ting, senior vice president and executive creative director of mobile and social platforms at R/GA — OMMA’s mobile agency of the year for 2011. “In my mind, being the best mobile agency means delivering on these three criteria.”

There’s also the matter of preparation as Interpublic’s prized unit began engaging in the mobile space over 10 years ago. “By 2007, that involvement took on a stronger, deeper commitment … and over these last four years we have been steadily developing and expanding our mobile offerings,” says Ting.

Illustrating the diversity of R/GA’s most recent work, Ting is particularly proud of Nike Boom — a training app that served as a consumer engagement platform to better connect Nike’s consumers. He also brags about Lawry’s Digital Dinner Bell — what Ting calls “the 21st century way for moms to call their families in for dinner”; and R/GA’s Converse Sampler — an augmented reality commerce shopping app.

“R/GA’s diversity of work is an example of our mobile expertise,” Ting points out.

“We don’t see those as limitations,” Ting says. “These so-called limitations actually force our creative team to simplify, to focus on the important features and get rid of the unnecessary ones. It’s actually quite refreshing to have to streamline a mobile experience to its core essence because of the built-in constraints of the medium.”

As a result, R/GA now has more than 40 people on its mobile team — and close to 300 people working on a day-to-day basis on mobile projects across the agency — with a focus on growing internationally.

“Additionally, we have a great culture at R/GA, which supports mobile,” adds Ting. “We never have a shortage of talent wanting to engage in mobile projects. Having this excitement around mobile makes it easy for us to stay ahead of the innovation curve.”

What’s the best piece of advice Ting can give his competition?

Beware of “thinking too small,” he cautions. “Mobile is ready to be the focal point of brand communications, and mobile work needs to be multiplatform, integrated across the Web and tablets.”

As for R/GA’s own strategy, “we think mobile-responsive Web,  near-field communication, and, surprisingly, the sustained importance of multiplatform apps will be key moving forward,” Ting says. “The best that we can do to prepare for it is to make sure that the right talent is in place, aggressively pitch work in these areas, and stay as up-to-date as possible with the technologies, focusing on how they impact consumer behaviors.”