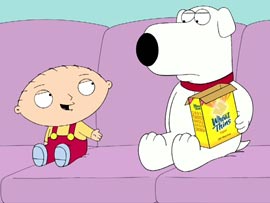 Kraft Foods’ Wheat Thins has launched new TV ads and a digital campaign around a “Do what you do” theme.

The theme emerged from the brand’s observation that members of its social community like to share what they’re doing while eating Wheat Thins.

The 30-second TV commercials, from Being, New York, feature characters from Fox TV’s animated sitcom “Family Guy.”  The first spot shows characters Stewie and his dog Brian arguing over the pronunciation of Wheat Thins (providing an opportunity to repeat the product’s name about 20 times). The commercial ends with the two joining forces to refuse to let Stewie’s father (heard off-camera) be in the Wheat Thin commercials. The message “Do what you do” and an image of a Wheat Thins box appear on screen. 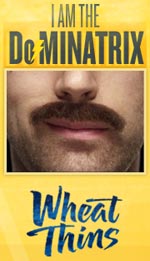 The new digital campaign, from agency AKQA, features “The Do-Minatrix" – a guy with a large mustache, whose face is shown in close-up only from the nose down (his eyes are cropped out in the videos, or obscured by a bar of color with the character’s name or other messaging on it). The character is meant to be a sort of digital life coach, using humorous messages to inspire fans to get out and do whatever it is they like or want to do.

The Do-Minatrix is featured in numerous, short videos on Wheat Thins’ Facebook page –most of them currently relating to New Year’s resolutions—and also frequently posts on the page.  Many of the Facebook communications/videos encourage fans to “do” something, then tweet The Do-Minatrix (using @WheatThins).