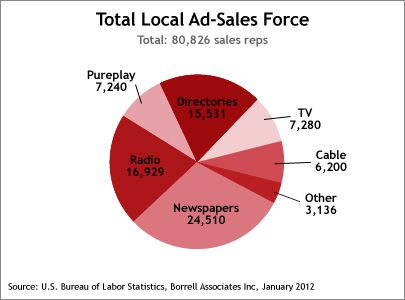 In the last two years, traditional media companies have increasingly consolidated offline and online reps into unified sales forces. The proportion of media companies with digital-only sales staff has dropped from 60% to 46% in that time. But a new report from Borrell Associates suggests that switching to a “converged” sales force could have costs.

The research firm’s survey of 230 local sales managers in late 2011 indicated that companies with dedicated digital salespeople outperformed those without by a factor of two-and-a-half times in gross online revenue per rep ($185,900 vs. $73,300). Among TV stations -- many of which have no sales reps dedicated exclusively to selling online advertising -- those with online-only reps average three times the gross online revenue ($208,200 versus $70,300).

“It’s clear that having a staff dedicated to selling online advertising -- and combining it with the efforts of the legacy media sales force -- drives more digital revenues. But what’s not clear is how many online-only AEs might be needed,” states the “Assessing Local Digital Sales Forces” report.

Some legacy media companies with five digital-only reps generated the same amount of online revenue as those with 20.

Among traditional media, newspapers were the only segment where a majority (55%) employed dedicated online sales staff. Four in 10 (39%) of TV companies had online-only sellers and just 11% of radio businesses. Of the 81,000 local advertising sales reps in the U.S. overall, 52,000 are pitching some kind of interactive advertising product or service. And of those 52,000, 86% work at legacy media companies.

How do the differences between digital-only and combined sales forces play out when it comes to compensation?

The study found the majority of media companies are paying base salaries that average $44,033 for the former compared to $35,460 for converged sales staff. “With the demand to hire good Internet sales reps, perhaps the bounty is higher. It’s getting harder to hire reps who are well-schooled in things like SEO, SEM, mobile advertising and social media,” according to Borrell.

Total compensation for digital reps was between $44,000 and $64,000, with 65% coming in base salary and the balance from commissions and bonuses. The report found that media companies are paying higher commissions to digital than traditional reps, as a result of their aim to sell more digital advertising.

Perhaps it’s not surprising then that managers surveyed by Borrell characterized digital-only reps’ motivation as “excellent” or “outstanding” at a rate of 72%, while among companies without dedicated online salespeople, only 18% used the same terms to describe the motivation of sales staff.

A similar pattern emerged when managers were asked about their sales reps understood the basic business trends for their advertising clients. Four in five (81%) of those with digital-only staff rated reps as having a good-to-outstanding understanding of their customers’ needs. Only 49% with combined sales forces said the same of their own salespeople.

But the Borrell study also noted that over the last decade, companies with completely separate digital divisions have fared the worst in harnessing the Internet for revenue growth. “It’s clear that those with completely separate divisions have fumbled badly, leaving large amounts of money on the table by failing to leverage their existing sales forces.” At the same time, those with fully converged operations with no digital-only sellers mixed in “have shown pallid revenue growth.”

The study concludes that companies with separate digital units with dotted lines -- which have their own P&L and both legacy and digital-only salespeople -- have tended to deliver the highest growth, with many increasing revenue 40% to 60% in 2011 compared to an average of 15% for local online advertising.