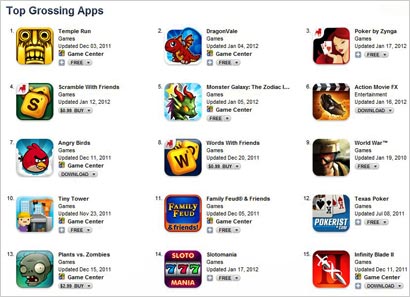 Free is the best way to make money in the app world, according to the IHS Screen Digest Mobile Media Intelligence Service. The market researcher’s latest projection of growth in in-app purchases sees a $970 million market in 2011 growing to $5.6 billion in 2015. IHS estimates that of the billions of apps downloaded in 2011, 96% were free.

The rapid shift to freemium models puts pressure on all app developers to keep the barriers to entry in apps low to nil. “In 2012 it will become increasingly difficult for app stores and developers to justify charging an up-front fee for their products,” says IHS Senior analyst for Mobile Media Jack Kent. “Instead, the apps industry must fully embrace the freemium model and monetize content through in-app purchases.”

The freemium model is not just for gaming anymore -- although that is the segment that pioneered the format. About 63% of in-app purchases in the iPhone App Store involved virtual currency, used almost exclusively in games. Another 22% of purchases involved additional game features or items. But there is also some purchasing activity in non-gaming apps for things like time-limited navigation, dating and premium access to social networks.

Upselling additional media content remains a nascent format of in-app commerce, however, at least in the smartphone areas. IHS found that only 2% of top U.S. in-app purchases involved video or TV content, for instance. And in the UK, 5% of the top purchases involved newspapers and magazines.

The IHS data are focused on smartphones in this research. On the iPad, the role of media content in purchases is much more pronounced. In the current top-20-grossing apps in Apple iTunes iPad Store, six are media properties, including New York Post, Zinio, ComiXology, NYtimes and The Daily. Kent tells Mobile Marketing Daily that for the last two quarters of 2011, “those with video content from TV companies and newspaper and magazine app as expected performed far better on the iPad than iPhone. Our initial tracking indicates that these types of app accounted for around 8% of the top-grossing iPad app in Q3 and 11% in Q4.”