Onitsuka Tiger Back As Fashion Brand 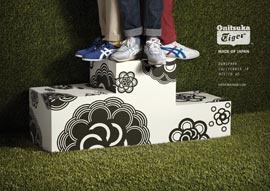 It's possibly the oldest shoe company in Japan, but unless you ran track in the 1970s, you may not have even heard of it. Onitsuka Tiger was one of the biggies in the running and hoops department against Adidas, and Nike. But the brand, started by a Japanese military officer after World War II, all but disappeared in the late ’70's, when it became part of the three-way merger that created ASICS.

Now it's back big time, with its first campaign -- a global effort -- in years, and a new positioning as a fashion lifestyle brand. Created by new global and U.S. AOR, Culver City, Calif.-based Pitch, the campaign carries the tag “Born of Sport, Made of Japan.”

The effort, which runs for a year, per the companies involved, spotlights the brand's past and its Japanese heritage. The visual motif -- appropriate enough given that the campaign runs during the Olympic year -- is a winner’s podium, combined with an arrangement of the plum blossom, a traditional Japanese flower.

"They saw that it had potential to be a fashion-forward brand, so this year and next they have increased the number of shoe styles and colors and radically expanded distribution toward fashion and higher-end retail outlets," says Rachel Spiegelman, SVP, group account director at Pitch, which started working on the brand last year and is also handling media buy and events.

Spiegelman says the effort is a whimsical play on the brand's sports heritage. "It's not to compete with ASICS athletic shoes. It's wear-to-work stylish."

Print ads will run in such men’s and women’s lifestyle, fashion and music magazines as Nylon, Complex, Teen Vogue, Filter, Fader and Vice. There will also be online ads, point of purchase elements, and branding and product at music and art events and festivals and, per the agency, through grassroots promotions.

Spiegelman says the buy in magazines like Teen Vogue also reflects an effort to market the brand to women, with color schemes and designs that depart from the brand's blue, yellow and red heritage.