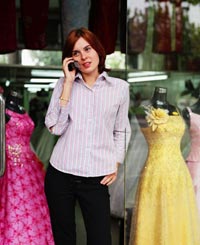 Yes -- consumers used their cell- and smartphones to help them make decisions when it came to holiday purchases, but good, old-fashioned phone communications was the most prevalent use.

According to the Pew Research Center’s Internet and American Life project, 52% of adult cell phone owners used their phones to aid decision making during the holiday shopping period. Thirty-eight percent called a friend while in a store to ask about a purchase they were considering. Twenty-four percent looked up reviews of a product, and 25% looked up prices.

“For all that we talk about texting and apps, it remains the fact that voice calling is still the largest percentage of use out there,” Aaron Smith, senior research specialist at Pew Research, tells Marketing Daily. “That is a consistent theme, and [one] worth keeping in mind for all of these technologies out there.”

Not surprisingly, those over 50 were less likely to use their phones for online product reviews and information than people in the 18-49 demographic. However, there was little difference between consumers 18-29 and 30-49, Smith says.

“The numbers are so similar,” Smith says. “[It shows] it doesn’t matter how much money you’ve got -- you’re always looking for a good deal.”