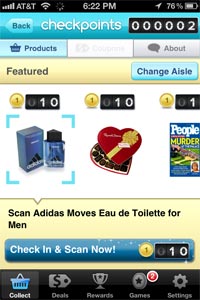 The maker of the popular CheckPoints shopper rewards app has renamed its company as it also plans to launch a network of its own and partnered apps that target messaging at the point of product scanning. The inMarket Shopper Network says it will reach more than 20 million mobile-empowered shoppers while they are in the store and actively scanning items for product information, rewards points or discounts. “If you scan a product in the laundry category we could present messaging that speaks to what you are shopping for,” says inMarket Mobile Evangelist Dave Heinzinger.

The CheckPoints app itself has already done this sort of point-of-scan messaging with many of its brand clients like Coca-Cola and Tyson Foods. But in a repositioning of the company, which has been renamed from CheckPoints to inMarket, the capability will now be part of a network of other apps with which the company has partnered or apps that use its APIs to embed scanning capabilities.

As part of this move, inMarket also announced a partnership with longstanding shopping app ShopSavvy. “Partnering with inMarket was a natural extension of our commitment to provide unique, diversified content for our users,” says ShopSavvy CEO Alexander Muse.

Heinzinger says that the model creates a network of shopping apps that can bring digital marketing accountability into the store. Marketing partners only pay when a customer has scanned their promoted product and has been delivered the right message. “It is like pay-per-click in the retail world,” says Heinzinger.

Some brands are targeting people who have scanned their own product because they know that people who pick up an item in a store are much more likely to buy it. The prompt to scan promoted items in the store is aimed at heightening engagement at the point of sale. The company claims that these post-scan ads and promotions have lifted consumer purchase intent up to 400% in previous campaigns.

The CheckPoints app, which will retain its current brand name, also has a scan-at-home feature that allows the user to scan promoted items they have already purchased. Here there is a real opportunity for brand conquesting or what inMarket calls “conversion campaigns.”

inMarket will achieve part of its promised reach to 20 million mobile-enabled shoppers through CheckPoints, ShopSavvy, other unannounced owned-and-operated mobile shopping brands and partners it acquires through the SDK.

Scheduled for release in the coming weeks, the inMarket SDK will enable app developers to include the scanner in their feature set. Heinzinger explains that for a game developer, scanning a product from within the game could reward the player with virtual currency for their own use.

The original CheckPoints app was released in October 2010. It competes directly with shopping rewards app ShopKick.