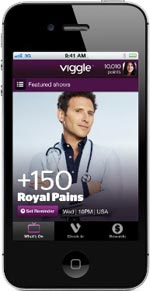 Social TV is off and running and, by all accounts, will become a vital part of how many consumers watch TV. So why not layer in rewards for watching shows? Viggle is doing just that. Viggle, with its iPhone and iPad apps, offers an interesting twist on the new field of social TV. Rather than just serve up companion content, Viggle offers rewards from brands for watching TV shows. It’s a smart strategy, and taps into the consumer mindset that’s powered the success of social games on Facebook and check-ins on places like FourSquare. Human nature dictates that we like rewards.

The app comes from Function(x), founded by Robert F.X. Sillerman who built and sold Clear Channel and Live Nation. Viggle has signed on brands including Burger King, Capital One, Gatorade, Pepsi and Verizon for potential advertising opportunities. Viggle points can be redeemed within the app for rewards from companies such as Best Buy, Fandango, Hulu Plus, Amazon, CVS, Banana Republic, Papa John’s, Sephora and others, or they can be converted into charitable donations.

Here’s how Viggle works. When you start watching a show, the app on your smartphone listens for an audio sample of the show. Viggle then detects what you’re listening to and checks you into the show, earning you a set of reward points. After that, you continue to accrue points based on how much you watch and you can then redeem them for rewards, akin to earning rewards for using a credit card for purchases. Extra points come from watching video ads, as well as for playing games, watching videos, taking quizzes or answering polls. Viggle is working with programmers such as Bravo and USA Network to layer in additional features and show-related engagements.

The bottom line — there are many social TV and second-screen apps vying for consumer attention. I’m not ready to declare winners and losers, but I like Viggle for the simplicity of its consumer proposition. Scratch my back, and I’ll scratch yours.

An Android version is slated for release soon.