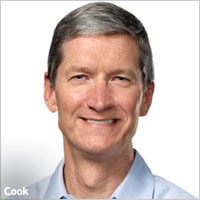 The post-PC era is upon us, Apple CEO Tim Cook reiterated yesterday (Feb. 14) in a keynote for a Goldman Sachs conference. He reported that the iPad and iPad 2 have sold more than 55 million units to date -- “something no one would have guessed.”

Cook explained that sales of the device have been “off the charts” and that people are quickly integrating tablets into more of their everyday digital media consumption. “But I strongly believe the tablet market will surpass the unit sale of the PC market, and it’s just a matter of the rate and speed and time that that happens,” Cook said.

Cook’s quotes come from a transcript of the talk published by CNNMoney.

BI Intelligence lent some support to Cook’s prediction in its new report claiming that tablet sales will reach 500 million a year worldwide by 2015. Including e-readers in their analysis, BI expects a compound annual growth rate of 50% for the category of devices for the next five years. Lower prices and growth in the sub-$500 segment will help drive the market, as will increasing adoption in enterprise and education.

Cheaper tablets will also have a strong appeal in emerging markets, giving more people a lower barrier to digital entry. Cook even noted that there has been some cannibalization of Mac sales by the iPad. But when it comes to cannibalizing sales, he said, “we prefer we do it than have somebody else do it.” Still, he believes tablets will eat more into Windows PC sales than into Macs.

Addressing directly the issue of pricing and Amazon specifically, Cook acknowledged that its rival’s $199 Kindle Fire entry into the market showed “different strengths” from the iPad. “Amazon is a different kind of competitor,” he said. “They’ll sell a lot of units -- I think they have and they will. But the customers that we’re designing our products for are not going to be satisfied with a limited function kind of product,” he added. According to many reports, Apple is set to reveal its third-generation iPad in early March, complete with a substantially upgraded display and faster processing.

Cook also addressed a range of issues that have been reported around the Apple brand in recent weeks. Controversy over working conditions across the Apple supply chain internationally has sparked investigations. Cook says Apple tries to educate managers and workers throughout the supply chain about their rights and working conditions. He said that eliminating underage labor in the supply chain is a priority, as well as imposing a code of conduct across suppliers that includes a 60-hour work-week cap. As a result of violations, he claims that Apple is beginning to micromanage work hours, and claims 84% compliance.

Cook also reported that 37 million iPhones had been sold in the last quarter. He notes that China represents one of the largest growth opportunities for Apple.

The newly launched iCloud storage service that synchronizes apps and content across devices will have a profound effect on the company, he said. Since October over 100 million people have signed in using the iCloud. “It’s a strategy for the next decade or more,” he added.

On the topic of entering the TV business Cook remained as obtuse as ever. He reported that Apple TV sold 1.4 million units last quarter, showing a growth trajectory. Despite widespread reports that the company is working on an Apple-branded TV system, Cook maintained the long tease. “We’ve always thought there was something there,” he said, although reiterating Steve Jobs’ famous characterization of Apple TV as a “hobby.” “And that if we kept following our intuition and kept pulling the string, then we might find something that was larger.”