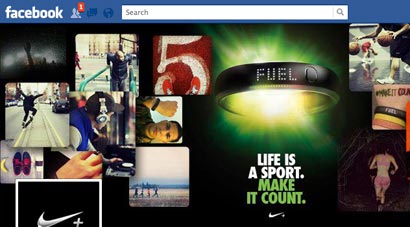 The moves come as Facebook prepares for an IPO this spring, in which it plans to raise up to $10 billion. Any new steps it takes to boost ad revenue could help it justify its estimated valuation of $75 billion to $100 billion.

Details about Timeline for brands were released earlier Wednesday before the formal rollout at Facebook’s inaugural fMC event at New York’s Museum of Natural History. While the redesigned brand pages for the desktop Web are launching today, they will also be available for smartphones later this year.

The other key change announced was the overhaul of Facebook’s Premium Ads, which occupy the most valuable real estate on the site, on the right side of the home page and profile page. In a keynote address at fMC, Mike Hoefflinger, director of brand product marketing at Facebook, said the format has typically delivered three times ROI.

Until now, the ad unit had allowed marketers to create ads inviting users to do things such as Liking a brand page, taking a poll or RSVPing to an event.

Now the ads will be created from content posted organically to their brand pages. Advertisers can generate ads based on various types of posts, such as status updates (text), photos, videos, links, questions and events. Facebook also added “offers” as a new option, allowing companies to share discounts and promotions via Premium Ads.

When those seeing an ad are friends with fans of the page, however, it will automatically expand and feature more prominent placement of friends' photos. The ads will also offer an expanded interface, allowing people to Like or comment on the post directly from the ad.

Both Premium Ads and Sponsored Ads, which typically appear on the right side of pages, can now appear in the News Feed -- both on the desktop and mobile version of Facebook. During testing in recent months, Hoefflinger said ads appearing in the News Feed show a five-to-10-times higher click-through rate than other Facebook ads.

The company also created a new placement for Premium Ads and Sponsored Stories, which highlight brand endorsements by friends, on Facebook’s logout page. Some 37 million people in the U.S. log out of Facebook each day, providing another way for users to reach a large audience as they exit the site. The logout placement will be available starting in April.

“One story, one creative, and we will take care of the reach and engagement, and distributing that story throughout these placements,” said Hoefflinger.

Facebook also introduced a new ad product called “Reach Generator,” that guarantees up to 75% of fans will see the brands content each month. It enables marketers to pay to sponsor one page post each day -- rather than paying on a CPC or CPM basis -- on users’ home pages. Test partners such as Ben & Jerry’s and Butterfinger's were able to reach 98% of their fans using the new tool, according to Hoefflinger.

Agency executives noted that both Timeline for brands and the revamped ads put more pressure on brands to have worthwhile content on their pages. “The new Premium Ads make creating compelling experiences within Facebook even more important,” said Simon Mansell, CEO of TBG Digital, which specializes in Facebook marketing for clients, including JetBlue and Capital One.

Reggie Bradford, CEO of social media marketing firm Vitrue, agreed. “The No. 1 priority for brands and marketers still should be on producing quality, engaging content to get people who Like your page to be more invested in your story, your history, your products and your success,” he said.

But how Facebook users will adapt to see ads popping up more often in the News Feed, especially in mobile, isn’t yet clear. Hoefflinger assured that ad placement in the News Feed will make “marketing on Facebook seem like the rest of Facebook.” But user backlashes against site changes have happened before.