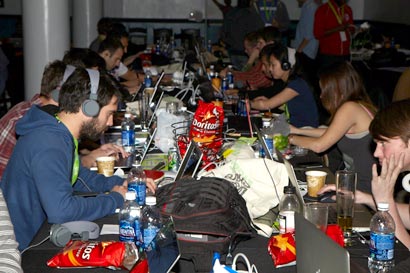 In what likely is the first initiative of its kind by a major ad agency and its clients, Omnicom’s OMD unit brought some of its biggest brands together with some of the app communities' most innovative developers to create new digital media experiences that could change the way consumers interact with brands. The initiative, which culminated in a 48-hour “hackathon” at an empty ping pong hall in downtown Manhattan, generated nearly 50 new applications for experiencing music on ad-supported online music service Spotify, some of which are already being optioned by the OMD client brands that participated.

The effort is the latest in the ongoing integration of Madison Avenue and Silicon Valley, especially for OMD, which has been trying to accelerate that process by bringing the two communities together for a common goal: to transform the way consumers experience media to benefit its clients' brands.

Over the past year, OMD has created an in-house “incubator” that embedded the founders of digital startups inside the agency’s teams, and hosted a series of VC “demo days” to brainstorm how emerging digital media platforms could transform the way they it uses media. The Hackathon was just the latest iteration of that, says Jon Haber, the agency’s chief innovation officer and head of its Ignition Factory unit, who organized the event, which took place the weekend of Feb. 25th at Susan Sarandon’s Spin Ping Pong Club in New York.

Haber says the initiative began last fall, when Spotify announced it would open its API (application programming interface) to third-party technology developers to create new apps for people who use the streaming music service. Since music is so integral to many of OMD’s brands, Haber said the OMD team jumped on the opportunity to tap into that by hosting its own hackathon.

Spotify put the word out to its developer community, and the agency received hundreds of proposals from third-party developers, which were narrowed down to 150 who participated in the event, along with executives from five of the agency's brands: McDonald’s, Doritos, Mountain Dew, State Farm and CW.

Haber said he initially had to explain that the terms “hacking” and “hackathon” do not carry the sinister connotations some people have with the term -- but are actually part of a creative process that digital media platforms and developers use to create new applications.

“We saw it as an opportunity for the brands to get closer relationships with the developer community to see what they could do with products on the ground floor, instead of just shoeing themselves into something after it was created,” says Haber, adding that the brands also took on the personae of “sponsors” of the event. McDonald’s provided breakfasts, and Doritos provided snacks and brought in interns to run errands for the developers as they hacked away. Mountain Dew brought in a band from its record label to entertain them. And State Farm sponsored a ping pong tournament in the Spin club.

The club was largely cleared of its ping pong tables for most of the event, and developers worked side by side at rows of long tables, with agency and brand executives walking among them, interacting and learning what goes on in the minds as they are hacking.

Haber said that one of OMD’s initial concerns was that the generally free-spirited developers might see the corporate connection as some kind of sellout, but he says there was none of that backlash.

“They didn’t see it that way. They saw it as this unprecedented access to the advertisers, which would ultimately be part of their monetization,” Haber says.

Actually, there was some immediate monetization during the event -- a $10,000 prize that went to the top-rated hack of the weekend. That prize went to developer Peter Watts for a new, as-yet-unlaunched music app called Swarm.fm. Watts, who is best-known for developing +Music, describes Swarm.fm as: “take the Internet, find everything related to music, shove it inside Spotify, and put a play button on it."

He says it will augment “your music collection with activity from your friends (liking bands, listening, posting songs) and activity from artists you like (new releases, status updates), to keep you up to date with your 'music universe. It also finds similarities between friends and can generate playlists based on artists, interests and brands you have in common."

Haber says the brands awarded other, smaller prizes to recognize innovative apps. McDonald’s gave away New York Knicks Jeremy Lin jerseys to the developer of BrandsNearBy, an app that enables Spotify users to utilize GPS technology to instantly find where performers of the music they are listening to are performing live nearby.

Haber says the 47 apps that were developed during the hackathon “exceeded our expectations,” and that some of the OMD brands have already begun working on ways to integrate them into their marketing, or even their own products.

CW network, for example, selected Museik, which enables TV viewers to assemble “music mosaics” of songs them are listening to, in order to augment the experience they have while listening to the theme songs of CW shows.

“This is all part of our philosophy of doing, not saying,” says Haber. “We’re not just pontificating about these things, but we are building new opportunities for brands to play in this space.”

agency, mobile, social media
1 comment about "OMD's Next Big Thing Is Just A Bunch Of Hacks (And Why That's A Good Thing)".
Check to receive email when comments are posted.
Next story loading