Giving agencies and brands the data to gain competitive intelligence to justify millions spent on mobile ad campaigns, Mobilewalla will release an analytics package supported by about 50 terabytes of data from Apple Apps Store and Android Market.

The platform, Mobilewalla Analytics, adds about 1 terabyte of data weekly. The data could change the way brands and agencies and publishers secure development and campaign budgets for mobile application. Anindya Datta, founder and executive chairman of Mobilewalla, told MediaPost the data -- available in near real-time -- within an hour can help brands determine their best strategy to run ads by category and region.

To put it in perspective, Google estimates about 450,000 apps in the Android Market with more than 1 billion downloaded each month, while Apple puts the number of app downloads made via its App Store at about 25 billion.

Mobilewalla Analytics pulls in publicly available data from these apps, as well as a developer's private sales data. The public interface gives subscribers access to non-transactional app data, such as details on daily and aggregated rankings, reviews and social media mentions in Facebook and Twitter. Users can sort the data by category, geography and dates.

Private data will detail transactional information, such as sales and downloads, along with time-series analysis of devices, countries, languages and platforms. It also offers Apple and Android leaderboards that allow the user to track top apps in different categories and geographies, by price, free or paid, amounts and Mobilewalla Scores.

A brand that wants to advertise in a fitness application, for example, could filter the information to find and compare data on apps available from 123 countries, such as the United States or France.

Datta said companies like Disney or The New York Times also can monitor the apps they publish to see what consumers or users say about them in social networks. "Agencies might want to know what apps have the most appeal across North America," he said. 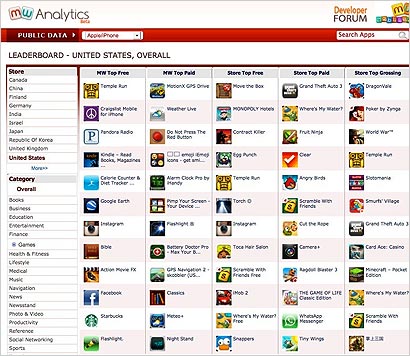