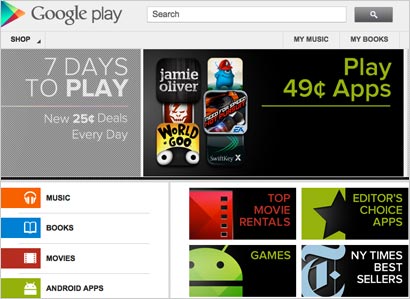 Google rolled up apps, ebooks, music, and movies into one service offering Tuesday, renaming the Android Market as Google Play and unifying a fragmented approach to digital content.

The move gives advertisers an outlet to reach more consumers, cross-sell apps, and serve up ads. For consumers, it offers a one-stop shop to purchase, stream or download digital products. And for Wall Street analysts, it combines revenue numbers that could put the Mountain View, Calif. company more in line with Apple.

Android and iOS combined comprise 91% of the mobile market for operating systems in January, according to Jumptap data released Tuesday. Android reached 58.8% market share; and iOS, 32.2%. The numbers are based on Jumptap data of more than 95 million monthly users.

The move represents Google's anywhere strategy -- the ability to access content from any Internet-connected device. Company executives have been talking about this for years. Now it's a reality.

Aside from allowing consumers to purchase movies, books and more, the service will allow users to store content in the cloud. This model will help users to access the content stored in one location via PC Google TV, mobile or on a desktop PC.

The Google Play store is accessible through play.google.com or androidmarket.com. Any user -- even those with non-Android devices -- can also access, download and play content from the store.