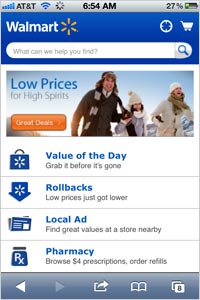 The renewed emphasis on mobile Web development among brands in 2011 paid off last holiday as many more mobile shoppers accessed the major retailers via browser than app.

According to Nielsen metering data taken directly from over 5,000 volunteers and their devices late in the year, the top brands combined -- including Amazon, Best Buy, eBay, Target and Walmart -- reached nearly 60% of smartphone users during the height of the shopping season. But in most cases the majority of that traffic was coming to the retail mobile Web site and not the app.

In October, mobile Web among the top five retailers reached 53% of smartphones, but 45% were accessing the retailer over their Web site and 24% via apps. At the height of m-commerce season in December, overall reach into smartphones among the top retailers peaked at 59%, but 51% of smartphone users were touching the brands via the browser and 28% by app. As the season ebbed in January, the full reach of retail among smartphone returned to the pre-season level of 52%.

Nielsen President of Strategic Initiatives John Burbank says of the new research: “Mobile shopping has reached scale and is only going to grow as smartphone penetration continues to soar.” Nielsen recently found that 48% of American adults now owned smartphones by the end of 2011, up from 44% in just the last quarter. Other metrics firms put the level of smartphone penetration somewhere in the mid 40s.

The preference for mobile retail sites over apps is fairly even across genders, although men are a bit more likely to use their browser than women. The gender divide varies according to retailer, however. At gadget-oriented BestBuy’s mobile site, 61% of visitors are male and 39% are female. But Target skews 65% female and 35% male.

Overall -- and not surprisingly -- Amazon is far and away the retailer with the most mobile Web reach, peaking at about 23% of smartphone users in the days around Thanksgiving, and retreats to about 15% after the holidays. eBay, the next-most popular retail destination on mobile, maintains a relatively constant 5% penetration throughout the October 31, 2011–Feb. 5, 2012 period that Nielsen metered.

Nielsen found that mobile Web site visitors tend to linger longer with the brands on their sites than in the apps. Still, Burbank advises brands that a multichannel approach that spans in-store, Web and mobile is essential to retailer success in the age of the mobilized Internet and mobile-empowered shoppers.

Dan Israel, Strategy Lead for Mobile and Multichannel at SapientNitro. says that while retailers may see more traffic coming to their mobile site than to their app, “I would be interested to see what the customer experience is for the brands that have the higher penetration on the Web. “ He wonders whether mobile Web visitors are more likely to be looking up store locations and hours. “I think what happens is the more cursory types of user will use mobile Web but the more committed brand-loyal people will download to the app.” He likens the app universe to cable channels. While scores of apps may be on a user’s deck, they tend to be return to a core of about 15 where they engage deeply. “You want to be among those 15,” he says.

Nielsen posts analysis and charts today at its blog.