kbs+p's Latest Venture Helps Incubate Others, Some Capital Returns And Strategic Insights Too

One year after launching, kbs+p Ventures has emerged as one of the most sophisticated venture capital units on Madison Avenue. Formed during the first quarter of 2011 by MDC Partners’ kbs+p and Media Kitchen shops to take strategic investments in startups that could have a strategic impact on the advertising and media industries, the venture unit celebrated its first anniversary with an annual report and a meeting reviewing its successes -- and returns on investments -– that looks every bit as buttoned up as any coming out of a traditional Silicon Valley VC.

While the returns aren’t always capital-focused, its founder, kbs+p Chief Digital Officer Darren Herman, says it is managing its investments with the same financial discipline and expectations for capital returns that any major VC would -- but the added benefits are the return on kbs+p’s intellectual capital.

That includes the same kind of strategic insights other big agency VC units seek, mainly early looks into promising startups that could influence the advertising business, staying close to Silicon Valley’s VCs, angels, and incubators. But kbs+p takes the program one step further by integrating the ventures it backs into its own organizations, and by rotating members of its operating agencies directly into the ventures unit itself to give its employees knowledge and experience they could only glean by working directly with entrepreneurs.

“What differentiates us from some of our peers is that kbs+p Ventures is actually at the operating agency level, not the holding company level,” explains Herman, a veteran Silicon Valley entrepreneur who was an angel investor before joining kbs+p and The Media Kitchen.

While his VC mentality has always been a part of the way he operates his organizations, Herman says he formalized the ventures unit a year ago with several goals in mind, but especially the fact that most of the businesses the agencies operated are involved in -- or at the very least are influenced by -- the development of new advertising and media technologies.

During its first year of operation, kbs+p Ventures took formal stakes in seven startups, mainly ventures operating in what would be defined as the ad technology sector. And while it is too early to put a dollar value on any of those because none of them have yet had an “exit” to produce a cash return, several have undergone secondary rounds of financing that boosted the paper value of kbs+p’s stakes.

More importantly, Herman says the agencies have gained intellectual capital by learning the inner workings of new advertising technologies that could have a significant bearing on the ad industry, and by integrating key members of its agencies into those processes.

On the flip side, he says the entrepreneurs involved in those startups have gained important insights into the advertising business that are likely to help with their success.

While some agency ventures units invest only strategic consulting in exchange for equity, Herman says every one of kbs+p’s stakes involved cash investments.

The seven early-stage companies it invested in were the result of more than 120 companies the unit evaluated during its first year, which also contributed to the pool of knowledge the agency has about what’s being developed -- and could have an impact in -- the advertising technology industry.

Herman says those investments were made alongside some of Silicon Valley’s biggest and most successful VCs, giving kbs+p Ventures even more insight and strategic relationships that are likely to help with future investments.

Herman says he can’t break down the exact amount of time he spends in the ventures unit, because those businesses are so intertwined with the overall way he operates, but he also works closely with Taylor Davidson, senior associate of kbs+p Ventures, who runs the unit on a day-to-day basis

Additionally, 18 “fellows” from the agency are assigned to the ventures unit to immerse themselves in the ins and outs of the startups and the overall venture mentality.

That has a positive rub on the agency operations, Herman says -- but it also means an opportunity to recruit new talent to the agencies, and potentially to even incubate new businesses from entrepreneurially minded people on the agency’s staff.

Herman says he has had a lot of interesting conversations with agency staffers, but so far none that the ventures unit has been willing to invest in. 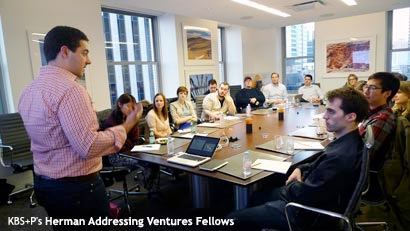