Intel: What Would You Do For An Ultrabook? 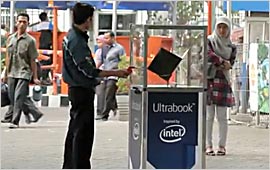 Intel tests what people would do for an Ultrabook computer, from breaking societal norms to testing feats of strength, in a new guerilla marketing campaign making the rounds in Asia.

In six lighthearted experiments filmed in four locations earlier this year, Intel placed some of its new Ultrabooks in heavily trafficked public places. The experiments were positioned as “temptations” that challenged consumers to go outside of their comfort zones for the chance to own a new Ultrabook.

One experiment, for instance, placed an Ultrabook in a glass box along with a hammer that passersby could use to break the glass and take the computer if they dared. Other videos, which can be viewed on YouTube, show people punching a sensor pad to show their strength and a challenge in which individuals were given five minutes to convince enough people to stand on one side of a seesaw to lift them up for a key to the Ultrabook box.

“Ultrabooks are a new category of mobile computers, inspired by Intel, with features from the best of both notebooks and tablets,” Paul McKeon, Regional PR Manager for Intel Asia-Pacfic, tells Marketing Daily. “Our goal is for the devices to become mainstream over the next few years. But we recognize that to many folks, Ultrabook is new term, so this campaign is one of the many things we are doing to introduce it.”

Filmed in Australia, Indonesia and Thailand in February and March, the videos are intended to entertain and inform people about the new Ultrabooks that are available. The videos were captured through roving and candid cameras to capture people as they really were. The overall creative direction as well as the concept came from The Monkeys, an agency in Sydney, Australia, McKeon says.

For now, the “Temptations” project has been introduced only to audiences in Asia-Pacific. But, McKeon says, there has been interest from other regions to conduct similar programs. “That’s something we’d love to do but haven’t committed to yet,” he says.