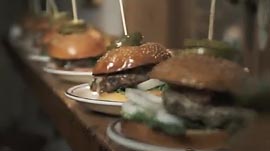 If you really want to know where the best restaurants, clubs, hangouts, coffee shops, happenings, galleries and all-things-cool are, don't ask a tour guide, ask a local.

The City of Brotherly Love is taking that to heart as it ramps up its focus on social media as a way to get the message across that Greater Philadelphia has a world of attractions beyond the Liberty Bell, Independence Hall and the National Constitution Center and other traditional spots.

The Greater Philadelphia Tourism Marketing Corporation (GPTMC) has launched a new local-focus digital/social campaign called "Philly 101" that comprises 101 one-minute videos over the same number of days, each one spotlighting famous, somewhat famous and not-so-famous Philadelphians who talk about what they do every day (in places worth visiting) while offering their own take on something visitors should see or do.

Caroline Bean, director of social media for GPTMC, tells Marketing Daily that the campaign is also meant as a social soap box both for the  people spotlighted on the video series as well as Philadelphians in general, since the platform encourages residents to contribute their own suggestions.

The videos feature the likes of the city's mayor, Michael Nutter; a Rittenhouse Hotel concierge who recommends the best BYOB places; Tariq "Black Thought" Trotter of The Roots; Top Chef winner Kevin Spraga, who owns the eponymous Philly restaurant; and Colin Shearn, bartender at The Franklin Mortgage and Investment Company.

Bean says the video series ends up highlighting 202 places, since each one features the venue in which the subject works as well as his or her favorite spot. Also, each of the people featured in the videos are touting the project via their own social media channels.

"We know that word of mouth is valuable, that really engaging people in the community, hearing what they do and where they work is really important, and authentic," says Bean. "Everyone we are featuring has their own network, their own audience. So building buzz means getting people we are featuring to promote it themselves.

"Our locals are the ambassadors; we want people to realize that their love for, say, the local coffee shop is worth talking about. The trusting first-person opinion about what is going on in Philadelphia is what we want to capture."

The corporation is also touting Philadelphia and the surrounding area as a tourism destination on platforms like Pinterest, Foursquare and Foodspotting. The GPTMC plans to promote its May campaign, "With Art Philadelphia," on Pinterest, where it will also cross-promote visitphilly.com, uwishunu.com and philly360.com on themes like "Iconic Philadelphia," "Shop Philadelphia," "Philadelphia Sports" and "Eat, Drink & Be Philly."

Also, on Foursquare lists, the organization is running curated guides of specific Philadelphia locations. The first eight such lists on foursquare.com/visitphilly include Free in Philly, Rooftop Bars in Philadelphia and Philly’s Great Brunch Spots.

Philadelphia is also the first destination to launch a major program on Foodspotting, per GPTMC, which says it has 1,500 followers on its Visit Philly account there. The organization, which has 25 foodie guides on the site, says its traffic and fan base there surpasses all other destinations, including Ireland and Hawaii, and is on par with other branded pages such as Travel + Leisure.

"Social media is no longer something we do in addition to other marketing," says Bean. "It is now an integrated part of all of the marketing we do. While traditional marketing is still very important to us, social is an equally important part of the mix."

Last month, GPTMC ran a "29 Nights of Dates" promotion on Facebook, which the organization said garnered 53,000 entries and 12,000 new fans.