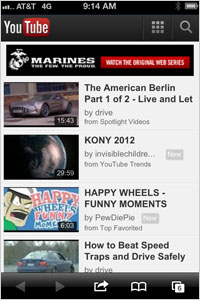 The United States Marine Corps on Monday will run an advertising campaign on YouTube for desktop and mobile. The campaign shows Marines as warriors and humanitarians. The ads target YouTube's traditional audience, males ages 17 to 24, and aim to complement the unit's YouTube Channel.

The campaign will run on the site for the second consecutive Monday this month. Last week, ads generated 133 million impressions in 24 hours. That means the ads had more viewers than the 2012 Super Bowl, at 112 million, and more than the most-watched TV show "Roots" at 130 million, according to Google.

As part of a recent rebranding campaign, the Marines ran an expandable home page masthead and mobile ads, as well as a First Watch ad unit, which Google launched last year.

First Watch activates when someone enters YouTube to watch a video through email, another Web site or search engine. On Monday, March 19, the Marines will run ads -- one each -- on the home page and mobile for 24 hours. The units have social tools that allow people to share the ads across sites like Google+.

"Research shows users are more likely to recall an ad or take action on the first ad they see," said Courtney Rose, Google's head of the public sector, referring to stats from the Center for Media Research. "That's why the YouTube home page takeover ad and the First Watch ad can produce higher return on investments."

The analytical data on the back end, such as the time spent with the video, comes from YouTube Insights.

JWT spearheaded the campaign, which aims to recruit potential enlistees. It conducts research for the Marines to keep an "eye on what the pool of potential American recruits is thinking. It found in the late 2010 survey of 17- to 24-year-olds that roughly 70% believed helping others was essential to being a good citizen today," according to the Associated Press.

While the Marine Corps --the smallest U.S. service branch at a little over 200,000 -- might be hiring, it isn't accepting all applicants. The U.S. service branches continue to receive an abundance of applications, partly as a result of the ailing economy. Many times recruiters must turn away young, enthusiastic applicants due to poor high school grades or college scores.