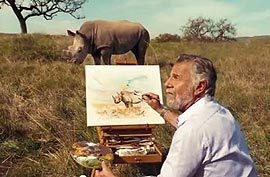 First, building on its “Legendary Lines” Facebook app, where myriad Dos Equis fans daily post their own witty lines about the MIM (and are rewarded by the brand), Dos Equis is now running a “Most Interesting March Tournament.”

Fans submitted their own MIM lines for tournament spots for a chance to appear in one of the brand’s ads. Dos Equis is now selecting the wittiest 64 lines; their creators will pick brackets in which to compete in a digital tournament. Those chosen will need to rally fan support each time their lines compete, in order to make it into the finals on April 2.

One, a 30-second spot dubbed “Sword Fight,” shows scenes from the MIM’s life, including sword fighting (in a kilt), getting wild animals to calmly pose as he paints them, winning what appears to be an Olympic medal, and yukking it up with Buddhist monks.

The voiceover: “He has inside jokes with perfect strangers. Cuba imports cigars from him. Mosquitoes refuse to bite him, purely out of respect...”

The second – a 15-second spot for Dos Equis Ambar (“A Darker Shade of Thirsty”), shows the MIM and female friends watching snake dancers in a desert setting.

Voiceover: “If you don’t have a dark secret, it’s never too late to make one.” And of course: “Stay thirsty, my friends.”