Let Your Fingertips Do The Shopping: iPad T-Commerce Up Sharply 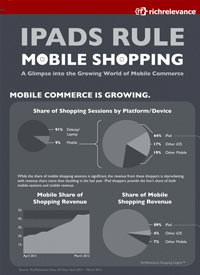 Online retailers should watch their server logs this Saturday and Sunday for a new phenomenon -– the weekend T-Shopper. According to its latest analysis of over 4 billion shopping sessions in recent months by RichRelevance, the share of shopping sessions coming from iPads escalates to 7% on weekends (vs. 5%) on weekdays. In fact, overall, non-workdays are mobile shopping days, with 6% of all orders coming from devices, compared to 4% on weekdays.

We already knew that weekends are especially strong in all areas of mobile use and interactivity. But it is the sheer velocity of the growth suggested in RichRelevance’s numbers that strike me, along with how much of the energy is coming from tablets. Back in April 2011, the company measured only about 1.9% of sales coming from the range of mobile devices. By the end of March, that share had grown to 4.6%.

The level of comfort with sealing the e-commerce deal from a phone has increased dramatically, I suspect. It is another indication of how much more rapidly user habits are evolving on this platform than they did on the Web before it.

But the curious thing about this trend that RichRelevance is detecting is how much tablets are driving this growth. The iPad accounts for 68% of e-shoppers through RichRelevance’s partners. Now, to be sure, the company is powering personalization services among major retailers like Walmart, Sears, Target -- so there is perhaps a whole universe of categories that favor smartphone access not included here. But among the retail sites that may appeal to that lean-in/lean-back mode that tablets seem to encourage, the iPad is responsible for 90% of the mobile revenue that RichRelevance sees.

Confirming what we have heard before, the iPad also brings in the highest average order value (AOV) with $158, compared to $105 for other mobile devices. Even more intriguing is that the iPad is also now comparing favorable to the much more established desktop Web, where AOV is slightly behind now at $153. iPad shoppers also tended to order fewer items per order than other mobile devices, but the value of the average item was $52.66 on average, more than double the $21.86 on the desktop and $23.80 for all mobile purchases.

But there are also vast differences between rates of mobile shopping among regions. For instance, RichRelevance found that in Montana, 95% of e-shopping is coming from more traditional desktop and laptop sources, while in Texas, 12% of site sessions at retailers are coming from mobile devices.

RichRelevance has crafted a skyscraper infographic outlining the findings.