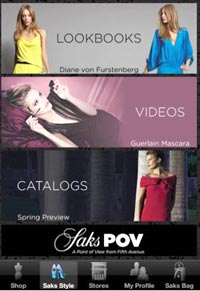 Very high-end brands such as Tiffany’s, Rolex and Gucci have become familiar sponsors of many smartphone and tablet apps in the last year. And for good reason. The rich like their apps the same as everyone else. Well, different apps, perhaps. According to new research from Luxury Institute in partnership with mobile marketing agency Plastic Mobile, apps from Gucci, Louis Vuitton, Saks Fifth Avenue and Gilt Groupe are the most downloaded by affluent smartphone owners.

The majority of these wealthy app users are downloading the branded experiences in order to find information on products and services. And a large share of these luxe app users (93%) say they have had good experiences with the apps. Perhaps more importantly, 71% report that the app experiences make them feel “better connected” to the high-end brands. Clearly, it is important for the high end to be present and accessible on devices, since 64% of these app users say they view brands with mobile apps more favorably.

While the high-end demo does embrace apps, they seem to be especially interested in enhancing the still-treasured in-store, personal service. For instance, almost half of respondents said they liked the idea of having salespeople armed with mobile apps that could offer more detail about a product and check availability. Overall, 45% say they still prefer shopping in-store, and only 20% of the affluent respondents who have make a purchase via their mobile device did so for a luxury item. The good news is that the wealthy are not averse to m-commerce. In fact, 72% put no monetary limit on the price of an item they would consider buying via their mobile device.

For the wealthy, at least, mobile apps are critically important to maintaining a relationship to their most treasured brands. But just as clearly, the affluent want their apps to support and enhance the live retail experience and the personal service they seem to identify with these brands. Membership has its privileges.