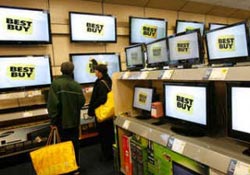 Are mobile and tablet apps really robbing physical retail outlets of customers and sales? Maybe not, according to a new consumer survey of mobile shoppers by Wave Collapse. “In-store app users shop,” says Joy Liuzzo, president, Wave Collapse. “They are significantly more likely to have made a purchase at one of the channels, from physical stores to mobile and tablet apps, in the last week than people who don’t use apps in store.“

In her survey of over 1000 smartphone users, 93% of people who use apps in stores had bought something at a physical location in the last week, compared to 84% of non-users of shopping apps who made a retail purchase. But these same people are also the most active buyers of products across the Web, smartphones and tablets, while people who don’t use apps in a store generally are focusing most of their buying at physical locations anyway.

In fact, the widespread retailer fear of “showrooming” (people finding products at retail they ultimately buy online or in-app) may be overblown. People consulting their cell phones may not be hunting for a better deal at Amazon or eBay so much as they are looking for a lower price at the store down the block. “We hear a lot about ‘showrooming,’ but people are just as likely to look for their local price comparisons as they are for online price comparisons,” says Liuzzo. Fifty-four percent of respondents said they are looking up other local stores, while 53% said they were looking for online pricing. “They are not just looking for the best online price,” she says.

In many ways, Wave Collapse’s research suggests that mobile is only making more transparent shopper behaviors that were already in place. “Showrooming and price comparison like this has always been happening, we just didn't see it before because people would have to leave the store,” she says. “It wasn't a reality until we observed it happening on the phone in the store.”

About a quarter of smartphone owners say they have purchased something on their mobile devices in the past week, while 60% have purchased online and 87% in physical stores. But the people who are purchasing on mobile platforms are doing so with remarkable frequency. Between 50% and 60% of m-commerce users are making multiple purchases a week. “This is showing that mobile purchasing behavior is actually different from online purchasing behavior,” says Liuzzo. Only 46% say they made multiple purchases in the last week on the Web.

But shopping habits are also different across physical store types, where Wave Collapse found that people work in various modes. People tend to browse without purchasing most often in electronics stores, malls and department stores. But on the whole, most other store types such as discount, grocery, general, convenience, hardware and drug stores are much more task-oriented, where people go in with a need to buy something.

But browsing is also the dominant shopping type for digital platforms, where about three-quarters of respondents are spending most of their time looking around rather than moving toward an actual purchase. This is precisely the opposite mentality at most physical stores, where about three-quarters say they are spending much of their time purchasing items. On both Web and mobile platforms, “this is a browsing mentality,” says Liuzzo.

In fact, across the board, Wave Collapse was finding that people who are making use of mobile devices to inform their shopping decision simply are bigger shoppers overall. To be sure, Liuzzo says, those people who do use mobile devices in-store are more likely to be browsing and are more likely to make a purchase online or on their device than those who don’t use shopping apps.

Shopping app users are also more likely to purchase on devices, although this group simply is more likely to make purchases on all digital and physical venues. But the in-store app users are the ones who are most likely to move from browsing to actively buying in the digital realm. They actually like using mobile and tablet devices to shop, says Liuzzo. “They really like what they are doing.”

The barcode and scanning apps are the most used app types  in store. Amazon, Red Laser, Google, eBay, ShopKick and ShopSavvy are the app brands that surface most often. The majority of the apps help with price comparisons and savings. Shopping app users actually already know how to shop and are not necessarily looking for convenience tools. Among those who don’t use apps in-store they expressed interest in comparisons as well, but they were also focused on convenience features like bill-paying, store aisle maps and shopping lists.

Liuzzo suggests that brands consider that people going to a brand’s apps are tending to be active shoppers who want to find the best information and deals about products, but that visitors to the mobile Web site may be less frequent shoppers who want the process to be made easier.