Barcode Scanning Up 157% In First Quarter 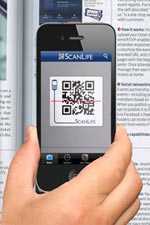 Mobile barcode scanning continued to climb at a brisk pace in the first quarter, according to the latest data from Scanbuy. Total scans through its ScanLife barcode app and third-party apps in the first three months of 2012 reached 13 million, up 157% from less than 5 million a year ago.

The app also processed traffic from more than 5 million unique users, up 200% from the year-earlier period. Virtually all of those users (93%) are coming from Android devices and iPhones, with the latter pulling almost even to Android in the first quarter (48% versus 45%) for the first time on strong international growth.

Men 25-34 are most likely to scan a barcode, with men overall outpacing women by a 2-to-1 ratio. The U.S. remained the top country when it came to scanning, followed by Spain, Canada, Denmark and France.

Looking at QR code campaigns in the quarter, Scanbuy found those delivering video, app downloads and product details were the most popular. Packaging was the most likely place to find QR codes, followed by the Web, direct mail, magazines and in-store. The last of these replaced outdoor among the top five code placements.

Among industry categories, CPG again led the way in rung QR code campaigns. The quick-serve restaurant industry was second, breaking into the top five for the first time as national chains distributed millions of codes. Entertainment, retail and wireless were among other top industry categories. The study findings reflect traffic from both QR codes and traditional UPC codes.