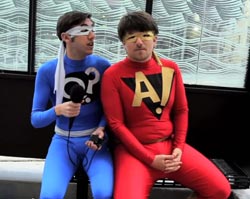 Granting three wishes of Seattle residents this summer could pay off in clicks and searches on Ask.com's question and answer site. The company released results Wednesday from a branding campaign that launched earlier this month.

The "You Asked, We Answered" campaign polled residents in and around Seattle, asking them to vote on the one thing they most want to change about the city. The choices included easing the morning commute, minimizing stadium traffic, and saving the wading pools.

While wading pools had the largest share -- 58% -- of the thousands of votes on SeattleAsks.com, the Q&A engine plans to grant all three wishes, making each a reality this summer with help from Answer Man and Question Mark Boy, two superheroes clearly making a spectacle as they make their way through the city.

Ask.com, an IAC/InterActiveCorp company, said it will respond to easing the morning commute by making the return to work after the Memorial Day weekend more enjoyable. The Q&A engine will partner with local small-batch coffee roaster Caffe Vita to hand out free coffee, complete with a take-home travel mug, at a half dozen Park & Ride locations at Northgate; Tukwila; Burien; South Kirkland; Issaquah-Highlands; Kent-Des Moines.

Mariners fans will have an easier time getting to and from games. Beginning June 16, and running for several games through early July, Ask.com will sponsor a fleet of free pedicabs, ready to take game-goers to their destination of choice -- either their home or the next bar.

Saving the wading pools also becomes a reality. Ask.com will donate the funds necessary to reopen the wading pools at the East Queen Anne, the Powell Barnett and the Wallingford locations each Saturday for the 2012 summer season, which begins the last week of June. The reopening of the pools for the summer will also include a surprise event.